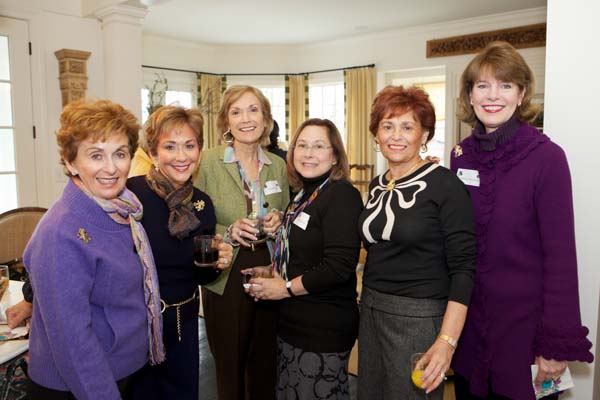 Despite the cold and snow swirling around them, more than 30 women braved the elements to attend the Lion of Judah/Pomegranate event at Maxine Rouben’s lovely home on Sunday, December 12. Co-chairing the program with Rouben were Julie Ellis, Kate Latts and Jennifer Tuvlin. It was a fascinating morning.

The four began the program with a brief history of how these two upper-level divisions of the Federation Annual Campaign were created. The Lion of Judah Division began 30 years ago in Miami when the Women’s Division chairs and their leadership committee wanted to recognize their peers. At the time, it cost $5,000 to rescue a family of four from the Soviet Union and resettle them in Israel, so they named those women who give at the $5,000 level “Lions of Judah.”

In 1981, the president and the Annual Campaign chair of the Allentown, PA Federation decided to create a pin that would enhance giving by women at the $1500 level and above. The symbol of the pomegranate was chosen because it is mentioned in the Torah that the fruit’s 613 seeds correspond with the number of mitzvoth (commandments) in the Torah.

“What is it to be a leader,” Ellis began. “It is,” she said, “a person who does things to help our Jewish community here and around the world. This is a wonderful time to stand up and be a part of the Campaign.” The group recognized Louisville Lion Cheryl Karp, who in November was honored at the Lion of Judah Conference in New Orleans with the Kipnis-Wilson/Friedland Award, which recognizes extraordinary women who have set a high standard for philanthropy and volunteerism in their communities.

Ralph Green, chairperson of the 2011 Federation Annual Campaign, mentioned the “positive energy in the community” and the recognition of the importance of moving forward in the campaign by getting the message out through personal conversations. The new Jewish Community of Louisville President, Stu Silberman, brought greetings along with the assurance that our community has “lit a fire in him” to do more and reflect the face of the community.

Guest speaker Erin Einhorn, a respected reporter for high profile newspapers in Philadelphia and New York, brought her family’s story to life as she traced their history from war-torn Poland and the Holocaust to their experiences in America. Since her mother would never discuss the details of her childhood with Einhorn, the young writer took it upon herself to travel to Poland to see it for herself and trace her mother’s formative years. She became transformed by what she learned.

Her grandparents lived in the ghetto in Nazi-occupied Poland in 1942 when her mother was born. Her grandparents were captured and her grandmother died – most likely in the gas chambers. Her grandfather, however, was able to escape from a death train bound for Auschwitz. He returned to Poland and asked a Catholic family he knew to raise his young daughter as their own in his home until he could return for her. Three years later, in 1945, her grandfather returned to Poland, rescued the child, eventually married a fellow survivor and the family left for Sweden. They moved to America several years later.

However, Einhorn’s mother steadfastly refused to speak about her past.

In 1999, after her mother finally spoke candidly with her about her life as a young girl, Einhorn was determined to research her mother’s story and find the Polish woman who protected her. Once in Poland, she was able to find the house where, remarkably, the family still lived. Although they warmly received her and asked after her mother, the family had their own secret – and their own upset – with Einhorn’s mother’s family. Although her grandfather had given permission for the family to live in his home, he never gave them papers that could prove their ownership. They confronted Einhorn with their story and asked her to help.

Now, a dozen years later, after working with three sets of attorneys and incurring $20,000 in legal bills to help the family claim their property, Einhorn says she feels close to resolving the issue. Her greatest regret, however, is that she did not have the opportunity to bring her mother, who died several years ago, to Poland with her. She says, “Every time we lose a survivor, we also lose an entire generation of those to whom they were connected.”

Just as Einhorn treasures her connection to her Jewish past, we too can be proud of those who came before us and strived with their hearts and souls and dollars to help guarantee a warm and caring Jewish community would be available for us and for our children. Can we do less for those who follow us? To make your 2011 pledge to the Federation Annual Campaign, please contact Sara Wagner at 451-8840.