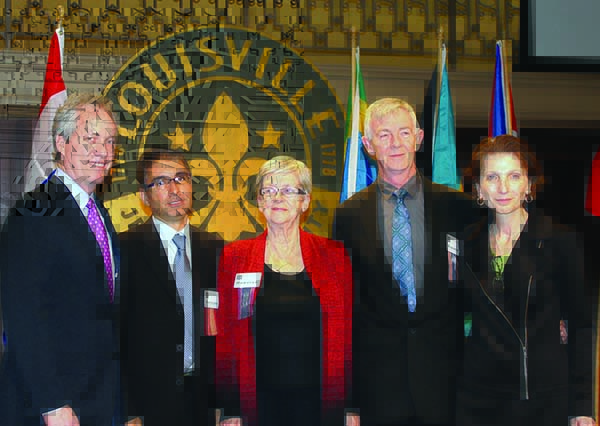 Mayor Greg Fischer and his wife, Dr. Alex Gerassimides, invited the press on April 8 to Metro Hall to announce the honorees who will be recognized at the 2014 MOSAIC Awards, the signature fundraising event for Jewish Family & Career Services.

They commented that it is rare for the Mayor to take on a significant role in a nonprofit’s fundraising efforts, but they believe that the MOSAIC Awards, which will be held Thursday, May 22, at the Downtown Marriott at 5 p.m., is unique and the only civic event that highlights the accomplishments of international Americans who are making Louisville a richer and more vibrant community.

Three of the five honorees were introduced that day.

Dr. Muhammad Babar, a Pakistani physician, has invested his volunteer time to represent the Muslim perspective with many of the city’s interfaith communities, including the Jewish Community Relations Council.

Dr. Johanna van Wijk Bos, originally from the Netherlands, commented that she followed her heart with her husband to Louisville in the 1970’s, and her association with the Presbyterian Seminary has led her to be a teacher, a theologian and eventually a champion for women’s rights and social justice.

Bruce Simpson, a Scot and the retiring artistic and executive director of the Louisville Ballet, commented that while he is receiving accolades from many directions as he leaves his post with the Ballet, he is truly honored to be receiving this recognition at the end of his career here.

Marta Miranda, President and CEO of the Center for Women and Families, and Dr. Joseph Twagilimana, an accomplished mathematician with Wellpoint, Inc., and leader in the local African refugee community, are also MOSAIC honorees.

The media event drew 10 past MOSAIC honorees, as well as Louis Waterman and Jeff Polson, who represented the Jewish Heritage Fund for Excellence, the event’s title sponsor. WLKY is the media sponsor, and Papercone Corporation, PharMerica and Kindred Healthcare are also major sponsors.

The MOSAIC Awards will be held May 22 at the Marriott Downtown. Individual tickets are $125 and table sponsorships are $1,500. The event starts at 5 p.m. with a reception and Business Showcase featuring micro-entrepreneurs who have received business training and loans from the JFCS Navigate Enterprise Center. The dinner and program begin at 6:30. Contact Beverly Bromley at bbromley@jfcslouisville.org or 502-452-6341, ext. 223, to make your reservations.

Get ready to get your game on. The 11th annual Republic Bank Players Challenge benefiting Jewish Family & Career Services and the Jewish Community Center is slated for Monday, June 23, at Standard Country Club. This year, the game Maj …

On April 9th, the JCC Senior Department and Louisville Beit Sefer Yachad joined together for the annual Intergenerational Interfaith Model Seder. This year was the biggest celebration in the program’s history, more than 75 people gathered for a delicious seder. …

LEO Weekly decided that Millennials are getting a bad rap. While 19-33 year olds are thought of as “unmotivated, lost and generally useless” as well as “obsessed with selfies, not selflessness,” that is not the case, the LEO column says. …