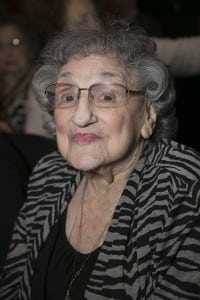 Annette Simon Sagerman passed away on Tuesday, October 27, at the age of 91.

“The Louisville JCC is a better place because of Annette Sagerman,” said Jewish Community of Louisville President and CEO Sara Klein Wagner. “She was a role model to several generations of professionals and her words of wisdom have not only touched countless Louisvillians, but have spread to Jewish communities throughout North America.

“Annette was a mentor, a leader and a champion of every person who walked through our doors,” Wagner continued. “She believed with her whole heart the JCC should be open to everyone.”

A proud Louisvillian who attended Louisville Girls High School and the University of Louisville, Sagerman began a part-time job at the Jewish Community Center (formerly the YMHA) when she was 19 years old and went on to work there full time until her retirement 65 years later.

During her tenure at the JCC, she held many positions, including director of the USO, cultural arts, adult activities, membership and hospitality departments. She was also one of the original founders of the Jewish Community Center’s Bingo program, which provided significant additional resources for the JCC for 29 years. Affectionately known as “aunt” or “auntie” by many, Sagerman always ensured that the JCC was open, warm and welcoming to all. She was always ready with a big smile and a word of encouragement.

Earlier this year, when the JCC paid tribute to Sagerman for her many years of service and devotion to the JCC and the community, a memory book was compiled for her. The following samples from the many letters that were included show why she was so beloved.

Joan Epstein recalled Sagerman’s kindness to her mother when the two shared an office at the JCC.

One of the many products Lee Benovitz’s company sells is burlap cloth. He recalled, Each and every fall, I could practically set my watch by Annette’s call to request burlap to cover the Sukkah. Each and every time she called, the conversation was so pleasant and heartfelt. One can easily sense the passion she has for the JCC. I miss her calls!”

“You may never know how much you taught we young upstarts through your decades of service,” wrote Michelle Aronoff Weinraub. “Thank you for telling me about the Jewish soldiers you all took care of during WWII on their weekends off from Ft. Knox.”

In my 34-year career, you are simply the wisest person I have met,” wrote Rabbi Robert Slosberg. “Your wisdom, insights into people and great wit have brought me so much joy and nachas.”

When Abby Kamen and her family moved to Louisville 19 years , “the JCC was one of our first stops as a young family. Our meeting with you was particularly vivid because of your warmth and welcoming spirit. If you were what Louisville represented, we knew we’d love it – and we do!”

“I don’t know how I would have made it through my life without you,” wrote Eloise Stemmle, who worked with Sagerman for 37 years. “You have been there through good times and bad, fun and sad and helped me with my life in general.”

“You made a lasting impression on everyone that you met,” wrote Andi Callam. “Some for cookies, others for your daily hello and smile and wealth of knowledge about the community.”

Sagerman was a walking encyclopedia of Jewish history and the Louisville Jewish community. Until the end she could regale listeners with accounts of events long past and provide information about friends and acquaintances she made over the year.

She was an avid grammarian and edited the speeches of the many past presidents and staff members of her beloved JCC. Sixty-hour work weeks were nothing to her and when she retired, she had accrued six years of unused sick days and 13 years of unused vacation. She said they would have to carry her out and they did at the young age of 84.

She was preceded in death by the love of her life “her David” Sagerman.

She is survived by her niece and nephew Jaye and Bob Bittner, who cared for her; her great nieces and nephews Sarah and Jarred Sparber and Jolyn Kramberg and Lane Sparber; her great, great niece Jordana and great, great nephews Doran, Jacob and Nathan Sparber, who shared hours of pleasure and unconditional love with their aunt.

The family sends special thank yous to her best friend, Eloise Stemmle, her former caregiver and dear friend Geraldine Kelly, the fabulous staff of Forrest Springs Health Care Center, and Drs. Gary Fuchs and Lowell Katz, who cared for her with unconditional love.

Sagerman’s funeral procession stopped in front of the JCC to enable the staff to stand on the front steps in front of wide open doors as a tribute to her service and their love and respect for her leadership.

The family asks that donations go to the Annette and David Sagerman Special Events Fund at the Jewish Community Center, Congregation Adath Jeshurun or the WHAS Crusade for Children.

Bruce Cohen of BC plumbing company stands with artist David Sanborn. Cohen sponsored Sanborn’s concert at the Kentucky Center November 18. Attended by 800 jazz fans, a portion of the proceeds went to benefit Water Step, an organization that provides …

In The Secret Chord, her latest novel, Geraldine Brooks (author of the Pulitzer Prize winning book, March, among other international bestsellers), has set herself the daunting challenge of portraying one of the most heroic and yet morally troubling figures in …