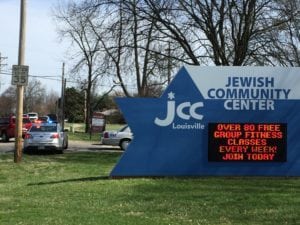 Israeli authorities have arrested a 19-year-old Israeli-American in connection with the rash of bomb threats directed against JCCs, including the Louisville J on March 8. (photo by Lee Chottiner)

JERUSALEM (JTA) — A Israeli teenager who also has American citizenship was arrested on suspicion of carrying out more than 100 bomb threats on Jewish institutions in the United States.

Israel’s anti-fraud squad arrested the 19-year-old suspect at his home in southern Israel and searched the premises on Thursday. He also is accused of a series of threats made in Europe, Australia and New Zealand in the past six months, according to reports in Israel. He also is reported to have called in threats to the Israel Police two months ago regarding Israeli educational  institutions.

He is reported to have tried to take a policewoman’s gun during his arrest and harm himself with it.

Israeli police said the teen has been the subject of months-long undercover investigation by the anti-fraud unit, as well as the FBI in the United States and law enforcement in other countries. He has lived in Israel for many years, Haaretz reported.

He appeared in court in Rishon Lezion on Thursday for a remand hearing, where he was ordered held over until March 30. His motives are unknown, according to reports.

Ynet, which reports that the teen is from Ashkelon, reported that during the hearing the teens attorney requested that he be placed under supervision after raising concern for his mental status, claiming that he might try to harm himself. The attorney told the court that the teen has had a brain tumor since the age of 14, and has been homeschooled since then. The attorney said that the tumor affects his behavior, Ynet reported.

The teen reportedly used advanced technology and voice-altering equipment to call in the threats to more than 100 JCCs, Jewish day schools and other Jewish institutions in the United States, according to The Times of Israel. He also is accused of making a threatening call to Delta Airlines, leading to the emergency landing of at least one plane.

During the cyber unit’s raid on the teen’s home, police found a computer lab with sophisticated equipment, encryption and transmission systems, and a powerful antenna, according to reports.

The army refused to draft the teen after finding him unfit for service, Haaretz reported.

His father also has been detained on suspicion that he knew about his son’s activities, and ordered held in jail until March 30.

“I congratulate the Israeli police on leading a complex international investigation, together with law enforcement agencies from around the world, which led to the arrest of the suspect,” Erdan said. “We hope that this investigation will help shed light on some of the recent threats against Jewish institutions, which have caused great concern both among Jewish communities and the Israeli government.”

Attorney General Jeff Sessions in a statement praised the work of the Israeli police and the FBI.

“The Department of Justice is committed to protecting the civil rights of all Americans, and we will not tolerate the targeting of any community in this country on the basis of their religious beliefs,” Sessions said in the statement. “I commend the FBI and Israeli National Police for their outstanding work on this case.”

Earlier this month, a St. Louis resident and former journalist, Juan Thompson, was arrested and charged for making at least eight bomb threats against Jewish community centers and the Anti-Defamation League.

Thompson, 31, made some of the threats in the name of a former romantic partner he had been cyberstalking and some in his own in an attempt to portray himself as being framed. He was charged with cyberstalking, which carries a maximum sentence of five years in prison.