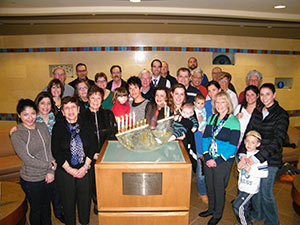 Members of the Fox family continued a 59-year tradition when they lit the Chanukah candles at Jewish Hospital Medical Center East each night during the Jewish holiday, which began November 28.

The traditional lighting of the Fox Family Chanukah Menorah is done to honor the memory of Hilda Fox, head nurse at Jewish Hospital for many years prior to her death on the fourth night of Chanukah, 1956. In addition to her other responsibilities, Hilda took it upon herself to erect a menorah and light Chanukah candles each year for patients and visitors at Jewish Hospital during the holiday.

After her death, the family purchased a simple wooden menorah and for decades, different family members came to the hospital each night of the holiday to light the candles in her memory.

This year, on the fifth night of Chanukah, Sunday, December 1, the Fox family along with Rabbi Michael Wolk from Keneseth Israel Congregation gathered and invited the community to join them for that evening’s candle lighting.

[by Shiela Steinman Wallace, Editor, Community] In the last issue of Community, we reported that Rubin Sher had died on October 23. I was in Israel at the time, and returned with only a week to pull the November issue …