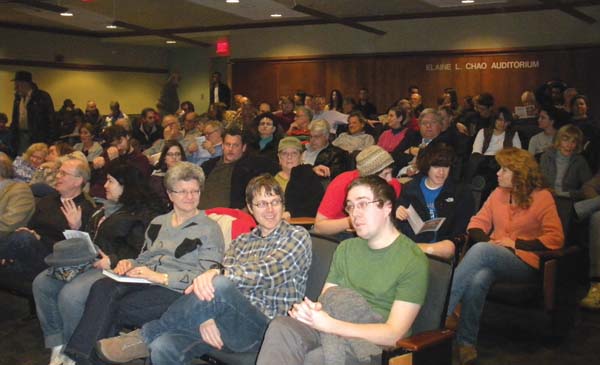 From opening night on February 12 at Adath Jeshurun, through the final short on February 21 at The Temple, the Jewish Community of Louisville’s Louisville Jewish Film Festival celebrated its bar mitzvah year with a wide variety of engaging films, many of which included guest speakers and dessert receptions.

Louisville native Jeff Roth, producer of the short, “Tough Crowd,” was on hand to answer questions about his animation work, which was shown on the first night along with the feature, Eli and Ben.

Middle schoolers from Kehila and The Temple Sunday Schools attended Inside Hana’s Suitcase at Village 8 free of charge, thanks to the Ann and Coleman Friedman Children’s Judaic Activities Fund.

When The Matchmaker, sponsored by Roanne and Karl Victor, was shown at Adath Jeshurun, Rabbi Joe Rooks Rapport of The Temple was the guest speaker.

In what has become a Film Festival tradition, the JCL partners with the University of Louisville for one of the shows. This year, U of L’s College of Arts and Sciences, Commission on Diversity of Racial Equality, Commonwealth Center for the Humanities and Society, Division of Humanities and Office of the Vice Provost for Diversity sponsored A Film Unfinished, which incorporated footage shot in the Warsaw Ghetto for a Nazi Propaganda film. Professor Natalie Polzer gave the introduction.

After another Holocaust themed film, La Rafle, John Rothschild was the guest speaker.

In a first-time collaboration, the Louisville Jewish Film Festival partnered with the Derby City Film Festival to show The Voice Teacher at the Clifton Center. The voice teacher himself, Don Roberts, and the filmmaker, Daniel Mendelson, attended the showing and answered questions from the audience. This program was also sponsored by Cantor David Lipp’s Discretionary Fund and Congregation Adath Jerhurun.

To close out the festival, The Temple hosted and sponsored the showing of a trio of short films from the Ma’ale School of Television, Film and the Arts in Jerusalem. Rabbi David Ariel-Joel was the guest speaker.
The festival also included the films Nora’s Will, Lost Islands and Anita.

Chai sponsors were Carlyn and Bill Altman, Barbara and Mike Fuery, Lynn and Leonard Goddy, Sarah and Mike Harlan, Carol and Mickey Heideman, Phyllis and Michael Shaikun and the Women of Reform Judaism at The Temple.

Marsha Bornstein is the Festival director.