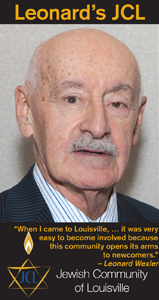 Leonard Wexler is not a Lousville native, but for him Louisville is home.

“We came to Louisville from the Chicago area,” he said. “We were really strangers here … but it was very easy to become involved. This community opens its arms to newcomers.”

When they arrived in Louisville, the Wexlers connected with Temple Shalom. “We joined that congregation when it was still a fledgling place,” he recalled, and services were conducted at Bellarmine University. “The people at Temple Shalom were a very welcoming group, and to this day, many of my friends are those same people.”

“Temple Shalom was a work in progress at that time,” Wexler observed, “and it still is. It was probably the first time we ever were truly active in any Jewish organization apart from just being a member.”

Wexler’s involvement led him to serve as the congregation’s president. “From there,” he continued, “I joined the Federation Board,” and went on to serve that organization as treasurer. Soon thereafter, “Bettyjane Fleischaker asked me if I’d like to join the Four Courts Board.” Subsequently, he joined the Jewish Hospital HealthCare Services Board.

In addition to the welcoming attitude Wexler experienced here, he notes there was always a lot going on and issues to be dealt with. During his tenure, the Federation Board addressed issues with Eliahu Academy and Four Courts, and, he remembers, “Jewish Hospital rescued Four Courts.”

“Some institutions had a sincere interest in this Jewish community,” he said, and that influenced him to become involved. The community was also blessed with outstanding leaders “who devoted a lot of energy as well as financial support to the community. We didn’t always agree, although eventually we would come to a consensus. It was very satisfying for me to be a part of that.

“It also increased my appreciation for the fact that I was Jewish,” Wexler continued. Compared to the larger Louisville community, the Jewish community “was doing a lot of good stuff. There was the hospital, Four Courts and the JCC.”

Wexler was particularly moved by the Louisville Jewish community’s response to the Jews’ release from the Soviet Union. “Our community, with everything it had going on, just opened its doors and its hearts to these emigrants and absorbed them.” He said. “There were special campaigns and a lot of effort, and it struck me that we’re a very unique community.”

“I’ve had conversations about the future with some of my contemporaries, and I think all agree it’s imperative that there emerge committed, young leaders. From what I read and see, I think there are candidates for that,” Wexler said.

“The move I made to Louisville, probably one of the best I’ve ever made, was certainly made easier and more satisfying and fulfilling through those activities I was able to engage in with the Jewish community,” he said. “A few years ago, they even convinced me to go to Israel, something I’d always resisted. I went on a mission. It opened my eyes and increased my pride in being a Jew. I plan to return for another visit.”

Professionally, Wexler worked in the field of finance in the corporate world. He retired from Glenmore Distilleries in 1994, and added, “I’ve been enjoying retirement ever since.

Fran passed away in 2004. They had been married for more than 51 years and had three children. Son, Larry, and Deborah Dusansky, live in Boulder, CO, with her children, Chava and Elie. Bruce and his wife, Paula, live in Suwanee, GA, with their children, Alex and Matt. Donna Wexler and her husband, Tracy Towns, live in Seneca, SC.