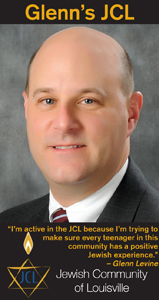 Glenn Levine is a Louisville native with fond memories of growing up here.

He attended Ballard High School and was an active member of Mu Sigma AZA. “I lived at the Jewish Community Center,” he said. “I played JCC sports – baseball, soccer, basketball – I did it all.”

“Now, I have teens, and I want them and all the kids in the community” to have the same kind of positive experiences I had so that they will become the leaders and active members of the Jewish community in the future.”

Levine attended the University of Missouri, where he earned a B.A. in economics, then took a job in Boston with Fidelity Investments before returning to Louisville to start his own financial planning business. In 1990, he decided to work for Citizens Fidelity Bank and stayed with them through their conversion to PNC. Then, he joined Firstar Bank, which became U.S.Bank, and he has now been with them for 12 years.

Today, Levine is a vice president and senior portfolio manager, and works for U.S.Bank’s Private Client Reserve in the wealth management group. “We work with high net worth individuals on all aspects of their lives,” he explained, “from investment management to banking services to the full spectrum of financial services.”

U.S.Bank has a culture that promotes community service, Levine explains. In fact, the company provides and encourages every employee to take eight paid hours each year during work to do volunteer work in the community. “We track and monitor it,” he said. “This is very important to the company.”

For Levine, eight hours is just a starting point. In 2008, he was one of 100 U.S.Bank employees to receive a U.S.Bank Five Star Volunteer award for exceptional volunteer service, and the Home of the Innocents received $1,000 in recognition of Levine’s efforts. The bank has 60,000 employees who are eligible for the award.

Levine has been an active volunteer at the Home of the Innocents for 12 years. Since 2007, he has been a member of its Board. In addition, he serves on its Resource Development Committee, which he has also chaired. In that capacity, he chaired the agency’s major fund-raiser for three years.
“The Home of the Innocents tugged at my heart,” he said, as they help abused, abandoned and medically fragile children.

He has also served on the Louisville Zoo’s Planned Giving Committee and volunteers with the Every1Reads program at Meyzeek Middle School.

With roots in the Jewish community and teenagers of his own, Levine has returned to assume a leadership role with the Jewish Community of Louisville. “I’m active in the JCL because I’m trying to make sure every teenager in this community has a positive Jewish experience,” he said.

“I’m trying to plant seeds for the future,” he continued. He hopes the young people who are engaged in the Teen Connection programs and assume leadership roles in BBYO, USY and NFTY, will make Louisville their home after college and will be the future presidents, board members and committee chairs of the JCL, synagogue and Jewish agency boards.

Currently, Levine chairs the JCL’s Teen Committee and its Endowment Investment Committee. He also sat on the Jewish Community Federation’s Endowment Board.

“A couple of years ago,” he explained, “Terry Cohen and a few other people created a grassroots initiative to explore how we could improve programming for Jewish teens,” an area they felt was not getting enough attention from the organized Jewish community. “I jumped on that group, the Louisville Teen Initiative,” he continued, “and that evolved into the Teen Committee.”

With a new Middle School Director at the Jewish Community of Louisville, David Siskin, and a reinvigorated BBYO program directed by Justin Sadle, there has been a marked uptick in participation. Levine wants to be sure this continues.

Today’s Teen Committee is community wide, he commented, “with representatives from every synagogue and every organization that touches teens and their parents.” To ensure that as many people are involved as possible to provide support for these programs, he is building a network of subcommittees, too.

For 2010-11, Levine explained, the Teen Committee focused on the social aspects of programming, just getting the teens to come together to have a good time. For 2011-12, he hopes to expand programming to include sports and education.

“Joanie Lustig and I did some research” about Jewish education, he said. “The post-bar/bat mitzvah drop off is tremendous,” not just in Louisville, but across the country. Once teens have their b’nai mitzvah, they get busy with sports or school, and Jewish education ceases to be a priority.

“We need to continue a strong education program through confirmation and maybe graduation,” he said. He and his committee are looking at ways to accomplish this goal.

He is also a past Jewish Community Center Board member and its Investment Committee. In addition, he served on the Jewish Community Federation’s Young Adult Division (YAD) Board and on the Annual Campaign’s Super Sunday Committee.

Levine encourages people to volunteer for things for which they have a passion. “I’m passionate about my family and kids, and I know investment,” he said, “so that’s why I do what I do.”

Levine and his wife, Marci, have two children, Jordyn and Daniel and they are members of The Temple.