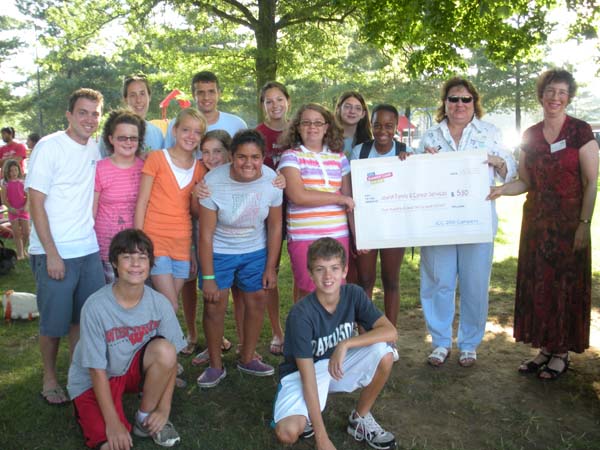 Pirkei Avot teaches us that it is not up to us to complete the work of tikkun olam, repairing the world, but we are also not free to ignore it.

The children participating in summer camp at the Jewish Community Center this summer also learned that it’s never to early to start making a difference when they participated in the Week of Caring and Sharing, July 19-23. Their goal: raise money for Jewish Family & Career Services’ Sonny and Janet Meyer Family Food Pantry.

Every camp group was involved in a swim-a-thon for which campers got friends and family members to make pledges and give donations.

Campers in the Community Service Camp (sixth, seventh and eighth graders) then took approximately $522.86 and went shopping for the food pantry. The balance of the money, $707.14, will soon be sent to JFCS for the Food Pantry.

So campers could enjoy their success, a ceremonial check of $530 was presented to JFCS Executive Director Judy Freundlich Tiell in a camp-wide celebration before the final figures were in.

Throughout the summer, campers have been participating in tikkun olam projects. Camp Keff had an intergenerational Shabbat lunch with the Senior Department, went to Four Courts, and with the help of Community Service campers, wrote letters to Israeli soldiers.

Campers also made Fourth of July cards, visited JFCS to learn about the food pantry and donated vegetables from the garden at the JCC and more.