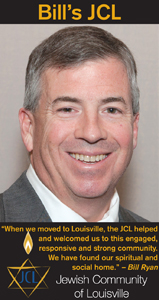 Bill Ryan has moved so often that he describes himself as a “road warrior,” but for now, Louisville is home.”

“When we moved to Louisville, we experienced personally the strong Jewish Community,” he said. “The JCC and Federation, now JCL, welcomed us. The JCL continues to serve the people of this area by understanding and caring for the needs of the person and the family. This helps to create an engaged, responsive and strong community. We have found our spiritual and social home.”

Coming from Cleveland, Ryan, and his wife, Amy, turned to the JCL’s predecessors when they arrived in Louisville. They were offered tickets for High Holiday services at a local congregation. There was room for their then 2-1/2-year-old twins in the JCC’s J-Tots programs. The children were also able to participate in summer and winter camps.

“It’s not about who you know,” Ryan said. The attitude they encountered across the Jewish community has been, “We’re glad you’re here.

Originally from upstate New York, Ryan was born in Gloversville and grew up in Troy. He earned a B.S. in technical communication from State University of New York, Brockport; an MS in instructional design from Ithaca College in New York; and a Ph.D. in computer technology and education from Nova Southeastern University in Florida.

His professional career has included positions at three Fortune 100 companies – IBM, Westinghouse and Humana. Just prior to coming to Louisville in 2004, he served as the chief information officer at a community college in Cleveland. Today, he is the vice president of education for Almost Family.

Ryan also believes in volunteering for the community. “My primary volunteer focus,” he said, “is with Jewish Family & Career Services.” His key interests are in the workforce development and boomer programs and the job seekers group. He’s also on the Executive Board of Greater Louisville Inc.’s HIRE (Higher Income Requires Education) program, which works with employee education and workforce development and is part of their Business Advisory Council and their 55,000 Degrees Initiative.

The Ryans daughters, Haley and Rachel are now 9 years old.