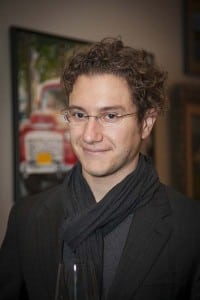 When Teddy Abrams was named conductor of the Louisville Orchestra, excitement bubbled up throughout the arts community. Outgoing, energetic and innovative, he has generated a buzz of support throughout Louisville.

Now the University of Louisville Humanities and Jewish Studies Programs have tapped Abrams as the featured guest for the 2015 Naamani Memorial Lecture Event. The event, “Jewish Music and Jews in Music,” will be Sunday, March 29, 2-4 p.m. at the Kentucky Center for the Performing Arts.

Abrams is a widely acclaimed conductor, pianist, clarinetist and composer. Prior to coming to Louisville, he served as assistant conductor of the Detroit Orchestra. The maestro also served as resident conductor of the MAV Symphony Orchestra in Budapest, which he first conducted in 2011. Abrams has appeared as a soloist with a number of orchestras, including the Jacksonville Symphony, where he played and conducted the Ravel Piano Concerto in fall 2013. He also performed chamber music with the St. Petersburg String Quartet, Menahem Pressler, Gilbert Kalish, Time for Three and John Adams, and has made annual appearances at the Olympic Music Festival.

Dedicated to exploring new and engaging ways to communicate with a diverse range of audiences, Abrams co-founded the Sixth Floor Trio in 2008. The Trio has performed around the country, establishing residencies in communities in North Carolina, Philadelphia, New York and South Florida. Abrams studied conducting with Michael Tilson Thomas, Otto-Werner Mueller and Ford Lallerstedt at the Curtis Institute of Music, and with David Zinman at the Aspen Music Festival; he was the youngest conducting student ever accepted at both institutions.

Abrams is also an award-winning composer and a passionate educator – he has taught at numerous schools throughout the United States. His 2009 Education Concerts with the New World Symphony (featuring the world premiere of one of Abrams’ own orchestral works) were webcast to hundreds of schools throughout South Florida.

The Naamani Lecture Event is free and open to the public. Refreshments will be served. Limited garage parking is available for $6. Online reservations are recommended at www.jewish-music.eventbrite.com. For additional information or to make phone reservations, call 502-852-0457.

More than 1,000 people showed up at Indiana University Southeast to hear Holocaust survivor Eva Mozes Kor of Terre Haute, IN, speak on February 10. So many people showed up, the lecture had to be broadcast to a second auditorium …

In January, a group of Jewish young professionals from Louisville now living in Washington, D.C., gathered to welcome Jerry Abramson to the nation’s capitol and celebrate his appointment to the White House staff. The group plans to get together once …

The JCC 125 Celebration had its Tip-Off event on January 25, which brought 90 community members of several generations to watch the UofL game, look at old photos and reminisce. The event is the first of the year’s 125th Anniversary …