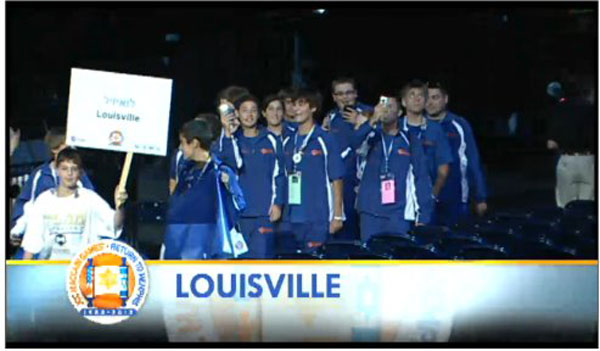 From July 27-August 12, attention was riveted on London as the world’s greatest athletes competed for gold, silver and bronze medals.

Although it might have escaped your attention, there was another major athletic competition much closer to home. The Maccabi Games drew more than 1,000 Jewish teens and their coaches from Jewish Community Centers from 25 communities around the world to the Fedex Center in Memphis from August 5-10, and 12 Jewish athletes from Louisville were among the competitors.

Like the Olympics, the games started with an opening ceremony during which the athletes donned the uniforms of their JCCs and marched into the stadium. Speeches were given and the torch was lit; however, in Memphis, unlike London, the 11 Israeli athletes who were murdered by terrorists during the 1972 Munich Olympics were remembered and honored.

In fact, there was a brief speech and the games’ official torch was lit by the daughter of Yossef Romano, one of the Munich 11; and the Wellspring, the folk-pop duo Dov Rosenblatt and Talia Osteen, debuted their original song honoring the Munich 11’s 40th yahrtzeit.

“It was pretty cool to be in the parade,” said Nathan Cohen, “and I was lucky enough to see my parents in the crowd because they were standing up for Louisville. … I felt like a basketball player walking into the arena.” Each time a city or country entered the arena, the announcer shared some facts about them.

Gabe Sherman, Bradley Schwartz and Jack Grossman also participated in track and field in the Second Chance Sports program. Their coaches and chaperones were David Siskin and Evan Rowe.

Hillary Reskin was the most successful Louisville athlete when it came to bringing home medals. She won five gold, four silver and two bronze for a total of 11. Since she was the only Louisvillian competing in track and field, when it came time to participate in relay races, she explained, “I joined other cities’ teams for the races, which was very fun.” 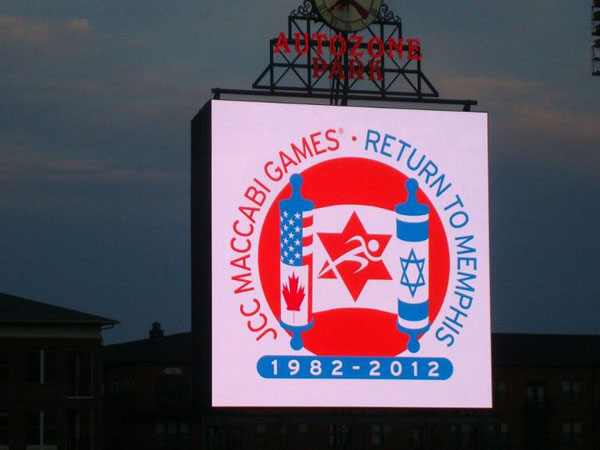 She competed in individual races ranging in length from 100 to 400 meters, in addition to several relays. She also competed in shot put, long jump, triple jump and discus. The only event in which she didn’t capture a medal was the triple jump.

“It wasn’t as competitive as I thought it would be,” she said. “There weren’t a lot of kids in track and field. I had never done the triple jump, discus or shot put before.”

Meyerowitz competed in lyrical solo dance for 13-14 year olds and captured a bronze medal. In addition to the actual competition, the dancers had rehearsals before the competition and “dance class was offered at the beginning of every day,” she said. She took advantage of the offer twice.

Many of the boys competed in the basketball competition. Due to a paperwork error, the boys – all 14 years old or younger – competed in the 15-16 year old bracket. While they couldn’t top the older competitors, their pluck and courage earned them a lot of respect.

The atmosphere at the games was so positive, Siskin reported, that even “immediately after a loss, the kids turned around, laughed, smiled and had fun.”

Daniel Levine agreed, “We lost all our games, but it was fun. It’s not about winning.”

“Basketball coach Evan Rowe said that I was the Dennis Rodman of the team,” Levine added, “because I could get rebounds even though the other guys were bigger than me.”

Cohen competed in table tennis and was seeded fifth of 11. Although he won six games and sustained just four losses, he said, “I wasn’t fortunate enough to get a medal.” He also participated in a doubles tournament, where he didn’t fare as well.

The Maccabi games are much more than athletic competition. The athletes also had time to spend with their host families, had an opportunity to explore Memphis, participated in a day of sharing and caring, went to the zoo and a party at Auto Zone Park (Memphis’ minor league baseball stadium) and had lots of time to make new friends from other communities.

During the day of caring and sharing, the athletes met with Tom Peled, an Israeli who founded an organization called Bike for the Fight (BFF), an international cycling charity that promotes awareness and raises money for the Israel Cancer Research Fund. The Maccabi athletes were encouraged to raise money for BFF, and each spent about 15 minutes riding stationary bikes alongside Peled to learn about the project. Before the games, the athletes raised more than $10,000 for the cause.

Participants also decorated mezuzot for and wrote notes to members of the Israeli Armed Forces and Jewish soldiers in the U.S. Armed Forces.
The Louisville teens enjoyed both the zoo and stadium trips. It gave them “hang time” with their friends in a relaxed and fun setting.

Levine thought traveling to the zoo and the stadium was cool because they had a caravan of about 20 buses with a police motorcycle escort. “We were in the lead bus,” he explained, “so we got to see the head car and all the motorcycles helping us.”

There was also enough free time built in that the teens could watch other competitions, root for their friends, or even try things they hadn’t attempted before.

There was also a frenzy of trading. Each team had unique uniforms, athletic bags and pins. Meyerowitz managed to trade for pins from every delegation that competed in the games. Nathan Cohen came away with a much coveted jacket from the Mexican team, although he had to trade almost everything he had to get it.

There seemed to be a consensus among Louisville’s competitors that Orlando’s pin was the coolest. “It lit up and blinked like Harry Potter’s wand,” Levine explained, “because of Universal City. … Ours was a Louisville Slugger type with a ball that slid across the pin.”

The Mexican and Israeli pins were also in high demand.

Most of all, they came away with friendships. Forged in the intensity of competition and lots of positive Jewish energy, these are friendships that will last a lifetime.

“I met people from Memphis, L.A., Texas, St. Louis, Orlando, Miami, and places like that,” Levine stated. “It was really cool just to see how there are people all over wanting to do this type of stuff. … I also was able to see some of my friends from camp” who came from Chicago and Cleveland to compete with their cities.

“I had a lot of fun and a lot of freedom to do what I wanted to do during the day,” Meyerowitz said. She and Reskin also had a terrific host family who made sure they had plenty to eat, could get where they needed to go and were well taken care of.

“It was a really great experience,” said Reskin, “and I’m looking forward to next year.” As the only track and field competitor from Louisville, she was a little uneasy at first, but she quickly met a lot of people and was at ease very soon. She plans to keep in touch with a number of them. Since the track and field athletes didn’t constitute a big group, Reskin said, “we all became good friends.”

Levine, too, hopes to be able to compete again, either in Orange County or in Austin. Next time, he wants to “bring more kids. It’s a cool experience to go and people should go and do it.”

“I recommend participating,” Cohen added, “because it’s really fun, and the more people we can get, the more fun it will be. If you know people from camp, you will probably see them there.”

“Thanks to David [Siskin] for making this possible,” he concluded. “I’m really glad he could take us to the Memphis games and put up with me.”

[by Matt Goldberg, Director] Jewish Community Relations Council Jewish Community of Louisville Shooting at Sikh Temple This past month has been a tragic one for our country, and particularly for all of us who are interested in interfaith relations. On …

On Yom Kippur afternoon, we will read in the Holiness code in Leviticus 19 God’s instructions to us about what we can and cannot harvest from our fields. We’re instructed not to harvest the crops in the corners of …