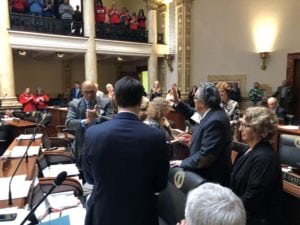 Fred Gross acknowledges a standing ovation from members of the Kentucky Senate and visitors in the gallery. (Community photo by Lee Chottiner)

FRANKFORT, Ky. – After 13 years of lobbying by a parochial school teacher and his students, the Kentucky Senate made history Wednesday when it unanimously passed a bill making instruction of the Holocaust mandatory in public schools.
By a 37-0 vote, with one senator not voting, the Senate sent the Ann Klein and Fred Gross Holocaust Education Act to Governor Matt Bevin, who is expected to sign it. The House passed the bill earlier this month.
When it becomes law, Kentucky will join New York, New Jersey, Rhode Island, Florida, Indiana, Illinois, Michigan and California as states that require some measure of Holocaust and genocide education.
Kentucky already has a curriculum in place, thanks to a law passed years earlier that encourages such instruction.
The bill requires every public middle and high school in the state to include in their curriculum instruction on the Holocaust and other acts of genocide, as defined by the United Nations Convention on the Prevention and Punishment of the Crime of Genocide. It further states that a genocide must be determined by “a court of competent jurisdiction” to have been committed.
Since approximately 10,000 Jews live in Kentucky, mostly in Louisville and Lexington, it wasn’t the political clout of the community that got the bill passed, but the work of many non-Jews who believed in the cause.
Fred Whittaker, a science and religion teacher of Holocaust studies at St. Francis of Assisi School in Louisville – a Catholic middle school – has been lobbying for mandatory Holocaust instruction for 13 years. He’s even involved his students in the process, bringing them to Frankfort to testify before House and Senate committees on how Holocaust instruction has affected their lives.
Other St. Francis parents and students have worked the phones and social media and stood on the capitol steps with signs in what became a full-court press for passage.
“Every year, there’s been some sort of activity where we have tried make legislators aware, the community aware, our peers aware,” Whittaker said. “Awareness has been the main battle in between the efforts that we have made in the legislature.” 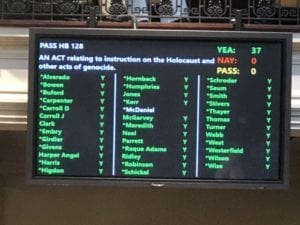 The screen says it all: 37-0 in favor of the bill. (Community photo by Lee Chottiner)

With the bill’s passage, Whittaker, who will travel to Poland this summer on a Classrooms Without Borders seminar to see the death camps and walk through the Warsaw Ghetto, hopes to influence Holocaust education here.
“Today marks both an ending of one particular kind of effort and of course the beginning of another kind of effort,” he said. “We really hope to be able impact not just what is taught, but how it’s taught.
“Our idea wasn’t to make an army of historians,” he added, “our idea was to make a collection of students throughout the commonwealth who have incredibly good hearts and understood that courage is compassion and power means mercy and kindness.”
Fred Gross, a Holocaust survivor and one of the namesakes for the legislation, and Linda Klein, daughter of the late Ann Klein, the other namesake, were on the floor when the vote was taken and received a standing ovation from the senators.
“I think it’s another beginning,” the 81-year-old Gross said, echoing Whitaker’s point. “It gives me the ability to gather my strength to continue to tell my story.”
A former newspaper reporter, Gross wrote a memoir of his Holocaust experiences. One senator read aloud a passage from the book prior to the vote.
Linda Klein said her mother would have been proud that Holocaust education will now be required statewide.
“She would have just been completely honored and happy about this important moment.”
Rep. Mary Lou Marzian, D-Louisville, a longtime sponsor of the bill, said it brought Democrats and Republicans together in an otherwise politically contentious climate.
“It was a bipartisan effort, and it’s a bill we can feel really good about,” she said, “and in an atmosphere that’s not so healthy to be in.”
Rep. John Carney, R-Campbellsville, a history teacher and another sponsor, said Holocaust education has had a profound effect on his students.
“I think it was one of the more knowledgeable and life-building lessons they brought out of my classroom,” he said.
St. Francis students Kaitlin Calvery and Rosemary Peters echoed that sentiment.
Testifying a week earlier before the Senate Education Committee, Kaitlin said that studying the Holocaust and working for the bill have taught her that even she, an eighth grade parochial school student, can make a difference.
“It summons us with unique power into making this wisdom our own and into understanding that we aren’t too young to create powerful moments,” she said.
Students who study the Holocaust, added Rosemary, “will emerge with their moral compasses more magnetized, pointing more powerfully to compassion and justice.”