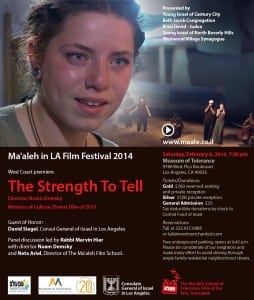 The Temple presents two student films from the Ma’ale School of Television, Film and Arts

A film which follows a group of Jerusalem at-risk  teenagers,  as they participate in Martef, a therapeutic program. The teens interview surviving witnesses of the 1961 Eichmann trial and create a play based on their stories. The young actors and the aging survivors develop bonds of empathy and understanding, connected by shared pain and loss.

A Jerusalem romantic comedy about a young moderately orthodox man who pretends to be more religious than he is.  What happens when his girlfriend discovers the truth?

A dessert reception will be sponsored by the Louisville Jewish Film Festival between the two films.