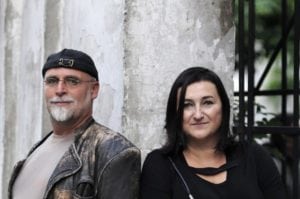 Uwe and Gabi von Seltmann each harbored a secret when they first met.

One man was a perpetrator; the other, a victim.

How this soon-to-be married couple would overcome the burdens of history is the subject of their new book, How Love Can Heal the Past, which will be available this month.

Uwe and Gabi will speak about their journey, through which they learned much about themselves and each other, during a special program at Temple Shalom, Sunday, October 23, at 7 p.m. Admission is free and refreshments will be served.

The Nazi connection to Uwe’s family ran deep. His grandfather was apparently important enough in the SS that Heinrich Himmler agreed to be the godfather to Uwe’s father.

Yet Uwe had an interest in Judaism. So while working in Krakow, where the couple now lives, he visited a synagogue there and met a rabbi from London who suggested he was Jewish. That prompted Uwe to dig into his own past.
Not only was he Jewish on his mother’s side, he learned, but his great-grandfather had been a rabbi.

Gabi’s grandfather was part of the Polish intelligentsia. The Nazis, fearing such men would become leaders in the resistance, took him away in 1942. He was imprisoned and later sent to Auschwitz where he was murdered in 1944.

For decades, her family kept his fate a secret.

“My family bore a similar pattern as Uwe’s,” Gabi has written. “Both of our grandfathers were considered to be taboo subjects among relatives. I also had asked questions, but never got any answers. My mother always immediately started to cry.”

Now, the von Seltmanns share their pasts with audiences, promoting the power of hope, reconciliation and understanding in our own lives.

The von Seltmanns will also meet and speak with students and teachers at several venues during their three-day stay in Louisville.

Jennifer Tuvlin began working for The J as the PJ Library director in 2013, and grew the program from 240 participants to 350. Along the way, she also took on Shalom Baby, The J’s program for infants and their mothers, …

Following up on its successful Connecting with Nature program, the Jewish Federation of Louisville’s Women’s Philanthropy presents Connecting with Culture hosted by Viki Diaz and Karen Abrams on Friday, November 18, 10:30 a.m.-1:30 p.m. This women’s program will include the …