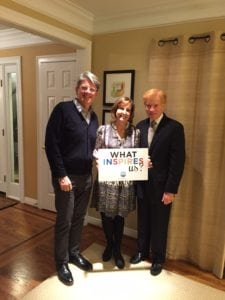 Rabbi Gary Zola (right) was the featured speaker at the latest Herzlian event on Monday, November 13, at the home of Julie and Jim Ensign. (photo by Stacy Gordon-Funk)

The house on the East End was remarkably inviting, large enough to accommodate the crowd of 12 to 15 people, but close enough to allow for mingling.
The catering was immaculately laid out, with a courteous wait staff offering drinks or appetizers to guests.
The speaker at the event, Rabbi Gary Zola, charmed the guests, taking the time to introduce himself at the dinner in an inviting manner.
The November 12 dinner was the third in a series of Herzilan events, a new series bringing donors together with a guest speaker to discuss topics of interest to Jewish Louisville.
“The focus is to provide more personalized attention and to design events and build community and create connections,” said Julie Hollander, director of women’s philanthropy at the Jewish Community of Louisville, who organized the series. “We have had three different Herzlian events and the guests were able to engage with others that they might normally not eat a meal with and learn about different topics. The responses from the guests at the events have been very positive.”
The dinner topic this night was the role Jews played in the civil rights movement. An ice breaker Q&A got things started followed by a round table discussion in which the guests shared examples of racism they had encountered and their experience working through anti-Semitism.
After the give-and-take, Zola, executive director of the Jacob Rader Marcus center of the American Jewish Archives in Cincinnati, commenced his conversation on the unique experience of the American Jew.
He discussed four separate aspects of the American diaspora that account for this experience:
• Jewish Americans were part of the creation of the union helping form the state;
• Jewish Americans were able to take up arms in the fight for freedom;
• The Constitution guarantees religious autonomy;
• The existence of an independent judiciary system.
“No other Jewish community anywhere in the world has been involved in the republic,” Zola said. “I’m not talking about Israel; I’m talking about the diaspora. It’s only here that we’ve been here in the colonial period, and we participated in the creation of this republic.”
He added, “We actually bore guns and fought for this nation. That’s also unique. Especially in America, where we talk a lot about guns, we forget that Jews were often not allowed to bear arms. They weren’t considered citizens or worthy of that privilege.”
Over dessert, Zola handed out a series of documents describing the Jewish-American experience throughout history. One paper recounted a quarel between a Jew and non-Jew prior to the Civil War. The Jew challenged the non-Jew to a dual and was rebuffed, the non-Jew saying the Jew was beneath him.
The Jew responded with a public ad accusing his nemesis of anti-Semitism and cowardice. Zola found in the incident a kernel of truth about the nature of religious discourse in antebellum America.
“Try to put ourselves back in Poland. You’re used to this kind of abuse and you just take it,” Zola said. In this case, “he’s not going to take it. He calls him a coward in public. One of the unique things about America that you can’t say anywhere else – not talking about Israel, just the diaspora – if you do this, you are not just a bigot, an anti-Semite, but anti-democratic and un-American.”