Michelle Hirsch gave three reasons why she became part of the solution: Her Uncle Kenny, a Cleveland group home resident named Howard, and a 94-year-old Holocaust survivor named Dobra.
Uncle Kenny lived in Akron, Ohio, where Hirsch is from. Socially awkward, probably on the autism spectrum, he was teased by other kids growing up. “He wasn’t all there,” Hirsch said.
Howard lives in a Federation-supported group home in Cleveland. She met him one day while volunteering to build Adirondack chairs for the dwelling’s porch. After three hours of working with Howard “in silence,” she recalled how they finally sat in those seats, and how he turned to her to say “thank you.”
Dobra is homebound, confined to a four-story walkup flat in Ukraine. Hirsch met her when she joined a Ukraine-Israel mission sponsored by the Jewish Federations of North America (JFNA). Dobra handed Hirsch a thank you card she made herself and said in Russian that she was “alive” thanks to people like her.
All three people have lived on the fringes of society. Forgotten by many, they have been nevertheless cared for by the Federation system.
For Hirsch, who is active in the Jewish Federation of Cleveland and is the chair-designate of the JFNA’s National Young Leadership Cabinet, they represent why she does what she does.
“My donation is not just about funding people like me,” she said Sunday, October 29, at the Jewish Federation of Louisville’s 2018 Campaign Kick-Off event. “My dollars are helping people like Howard, Uncle Kenny and Dobra live like the human beings they are; with dignity and comfort.”
Hirsch was the featured speaker at the Kick-Off. As she spoke, a slide show shuffled through snapshots of Uncle Kenny, Howard, Dobra and her native Akron, whose Jewish community, she said, is quite like Louisville.
“What Inspires You?” is the theme of this year’s campaign. The goal is to raise over $2 million. Guests at the kickoff were given pledge cards they could either fill out that day or return later.
Jerry Abramson, co-chair of the 2018 campaign with his wife, Madeline, and Ariel and Faina Kronenberg, said this year’s drive will differ sharply from those in the past. 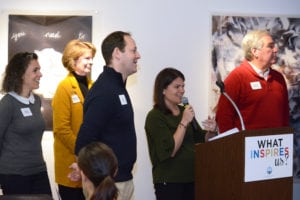 For instance, the Abramsons, who have experience running campaigns, will work closely with the Kronenbergs, grooming them to take the lead on next year’s campaign and, in turn, train future chairs – “l’dor v’dor,” as Jerry said.
This year’s campaign will rely less on formal dinners and more on smaller, intimate events to promote support. He cited the upcoming Herzlian events and women leadership activities and the Men’s day of Racing at Churchill Downs as examples.
“It’s a new day in this campaign,” he said. “We’re doing things differently.”
Jerry also called on Baby Boomers who have “checked out” of Federation activities to get involved again.
According to Hirsch, The Louisville Federation support has helped to provide more than 18,000 meals served through Chavurat Shalom, The J Senior Nutrition and Meals on Wheels. Additionally, 8,400 hours of homecare have been provided to senior citizens.
Helping people who need it most is her number one reason to give, she said.
“To me, there is no better case for federated giving. I will never know about all the Howards, but the Federation does. They know about every need in our local communities, in Israel and overseas.”
Sara Klein Wagner, president and CEO of the Jewish Community of Louisville, updated the audience on allocations the JCL made over the past year.
“Tough choices” had to be made, she said. Some programs, such as One Happy Camper and Birthright, were reduced while others – aid to Jews in the former Soviet Union – were increased.
“It’s not just about being Jewish. It’s about how we do Jewish,” Wagner said.
David Kaplan, chair of the Jewish Heritage Fund for Excellence (JHFE), the community’s grant-making body established with funds from the sale of Jewish Hospital, reinforced the need for the campaign.
Addressing suggestions by some that JHFE’s recent receipt of $150 million from Catholic Health Initiatives in return for giving up its remaining interests in the hospital, Kaplan said it would be folly to give up the campaign, and the money it brings in, since his foundation does no fundraising of its own.
Fundraising, he said, is the means donors have to “shoulder the burden” of keeping the community viable and ensuring that whatever inspires them about Jewish Louisville continues to be funded.
“We’ve got to have that campaign,” he said, “and it has to be robust.” 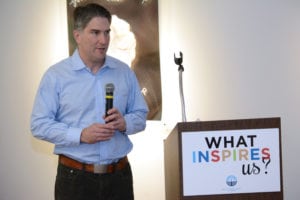 David Kaplan, chair of the Jewish Heritage Fund for Excellence, said the need for the campaign remains great despite his foundation’s recent $150 million windfall.