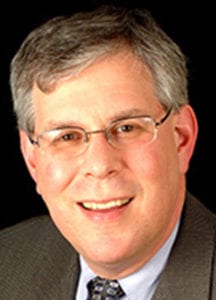 Rabbi Daniel Freelander understands the issues facing Jews living beyond the borders of the United States and Israel. After all, it’s his job.
As president of the World Union for Progressive Judaism (WUPJ), Freelander represents more than 1.8 million Reform and Progressive Jews from 1,200 congregations around the globe.
He will address issues facing these communities during his weekend visit to Louisville from April 5 to 7. Programs are being planned at Temple Shalom and The Temple, which are sponsoring his visit, along with the Jewish Heritage Fund for Excellence.
They hope he will shed light on Jewish life worldwide.
“Rabbi Freelander brings a message of inclusiveness, of full equality to all Jews, irrespective of gender and sexual orientation,” The Temple Rabbi David Ariel-Joel said, “a message of embracing all who identify as Jews in our community and of calling for social justice, equality and commitment to peace.”
Rabbi Beth Jacowitz Chottiner of Temple Shalom expects Freelander’s visit to help Jewish Louisville appreciate the unique circumstances Jews in other countries face.
“It’s easy to see ourselves in our own Louisville bubble, focusing on our own local successes and issues,” Jacowitz Chottiner said. “When Rabbi Freelander comes to town, we will be reminded that we are intertwined with an international Reform Jewish (Progressive) community and energized by their initiatives and successes.”
On Friday, April 5, at Temple Shalom, the topic will be “Jews Move: Why New Reform Communities are Developing in Asia and Spain.” Services will begin at 6:30 p.m. with Rabbis Jacowitz Chottiner and Ariel-Joel leading. Louie Bailey, Jennifer Diamond and Sam Thal will provide the music. An oneg will follow. The Temple is offering bus service to Temple Shalom; RSVPs are required.
On Saturday, April 6, 10:30 am Shabbat services at Temple Shalom will start. A noon lunch and learn will follow. Freelander’s topic will be, “Will the Real Reform Judaism Please Stand Up: Understanding Progressive Judaism in North America, UK, Germany, Brazil and Israel.”
At 11 a.m., Sunday, April 7, during a brunch at The Temple, Freelander will address the topic “Training Rabbis for Global Judaism: Stories from London, Berlin, Moscow, and Buenos Aires.” He will interact with rabbinic students from Moscow and Buenos Aires via Skype during the brunch. The Brotherhood and Sisterhood are co-sponsoring.
A native of Worcester, Massachusetts who was ordained at Hebrew Union College-Jewish Institute of Religion in New York, Freelander served in senior positions at the Union for Reform Judaism (URJ) for nearly 40 years, retiring as its senior vice president.
He has worked on several Reform initiatives, including URJ Biennial conferences, music and worship initiatives, camping and Israel programs.
A gifted musician, he has composed and recorded dozens of popular Jewish melodies, including the well-known “Shalom Rav” and “Lo Alecha” together with Cantor Jeff Klepper.
Freelander also serves on the boards of the Zamir Choral Foundation and the Mary McDowell Friends School. He is married to Rabbi Elyse Frishman, editor of the Reform siddur Mishkan T’filah.
Established in London in 1926, The WUPJ strives to establish new Reform
Jewish communities wherever Jews live, strengthening Progressive Jewish life with youth camps, Torah scrolls and conversion programs. It also ensures the training of international rabbis, congregational leaders and youth.