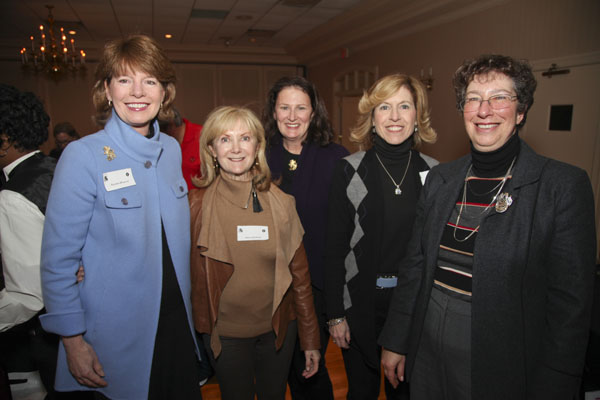 When Lion of Judah and Pomegranate Event co-chairs Janet Hodes, Alison Silberman and Jennifer Tuvlin confirmed that they were able to bring Rochelle Shoretz to Louisville to speak on January 24, they knew they wanted to give all the women in the community the opportunity to hear her.

To accomplish this, they planned a dinner for the Lions and the Pomegranates at Standard Country Club, during which the women could meet and talk with the dynamic founder of Sharsheret, and added a dessert reception open to all women in the community, during which Shoretz shared her story.

Shoretz was speaking from experience. Just days before her 29th birthday, she found a small gray spot on her breast and felt a lump that was not present on the other side. It was malignant.

As a young woman dealing with the fear, uncertainty and dramatic changes brought on by dealing with cancer, she looked for another young Jewish woman who had been through the experience and could serve as a peer mentor for her.

Cancer among women that young is rare – it strikes only one in 2,000 – and is usually a more aggressive type and is often gender sensitive.

A young woman dealing with cancer must also consider how her disease will affect her dating or married life as well as decisions about having and/or raising children. If there are children involved, how and what should the woman share with them, and are they at greater risk of cancer? If she is unmarried, how and when should she tell her partner?

If the woman is also observant, there is also the layer of ritual issues to consider. Cancer treatment involves body changes from the loss of hair to surgical changes, often to very private areas. A married woman wears a wig to cover her hair. What are the implications for an unmarried woman dealing with hair loss? And what if the woman chooses to keep her condition private? How does this affect going to the mikvah?

There are also genetic questions that must be answered. It is known that the BRCA1 and 2 genetic mutations increase the likelihood that a woman will develop cancer in her lifetime. In the general population, one in 345 women carries the defective gene. Among Ashkenazi Jewish women, one in 40 carries it.

Finding a peer mentor proved difficult, but Shoretz is not only resilient, she is resourceful. The support network she needed didn’t exist, so she created it. Sharsheret, the Hebrew word for link, as in a chain link fence, came into existence to link women facing cancer, particularly young Jewish women, with other women the same age and in similar circumstances who have been through the same kind of cancer and treatment.

Since its founding, Sharsheret has created more than 24,000 links, creating support networks for newly diagnosed breast cancer patients. In fact, Sharsheret is a nationwide network and, thanks to easy access to telephones and the internet, the “links” don’t have to live close to each other.

In the course of her talk, Shoretz revealed that she is once again dealing with cancer. This time, Sharsheret is there to provide her with the resources she needs to live with stage four cancer.

Sharsheret also fosters local support groups in addition to serving as a national resource, and is supported by donations, including grants from Federations across the country. In addition, the group recently received a three-year $1 million grant from the U.S. government for outreach.

Karen Abrams, the 2013 Federation Campaign chair, gave a brief update on the changes that have taken place at the Jewish Community of Louisville in the past year and encouraged those present to give generously to the Campaign.

Janet Hodes welcomed everyone and encouraged them to attend upcoming events, including the Young Adult Campaign Event, Super Sunday, the Jewish Film Festival and CenterStage’s production of Joseph and the Amazing Technicolor Dreamcoat.

LOUISVILLE, Ky. (WHAS11) – The Jewish Community Center held their annual telethon to raise money for the Jewish Federation of Louisville. Glamour and fun headlined the event where supporters dressed as celebrities in pre-Oscars fashion. The money raised at the …

Two CEOs of major companies, an educator and pioneer for women’s rights in Muslim countries, a Paralympic champion and a physician searching for a cure for macular degeneration. These five individuals have made their mark in our community and will …