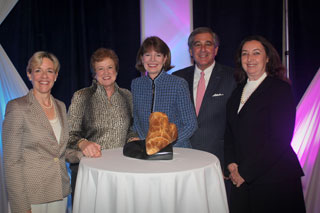 When she and 1100 other women and men attended the 2010 Women 4 Women Luncheon on Friday, September 17, Madeline Abramson had no idea that far more than just an enjoyable program was on the day’s menu. Abramson and her husband, Mayor Jerry Abramson, were both totally surprised when her name was announced as this year’s recipient of the Heart of the Community Award.

According to the program, the award honors a person or organization that has provided extraordinary support to the entire community in terms of time, service and heart. First given in 2002, award recipients are recognized for their dedication to the community as a whole.
When Dr. Shirley Willihnganz, Women 4 Women board chair and executive vice president and provost of the University of Louisville, presented the award, she said, “Madeline exemplifies a person who lives and leads with her heart, and she is extraordinarily deserving of this recognition.”

She lauded Abramson for being an outstanding partner for her husband for the betterment of the community. She also recounted serving on her first board with Abramson and using her leadership example to shape her own career and service to the community.

“I am honored and humbled to be given the award by an organization that cares so much about the community,” said Abramson. “I don’t think I have accomplished more than others, but I think they recognized I’ve done what I could for the right reasons.” She commented on the beauty of the award itself, a 40 pound Yvette Winnette pink and white alabaster sculpture featuring a large pink heart.

A graduate of the University of Louisville, Abramson has actively served the Maryhurst organization for 20 years and is currently is serving her second term as board chair. She also chairs the board of the Kentucky Center for the Performing Arts and just completed a two-year term as board chair of the American Red Cross Louisville Area Chapter. She is an advisory director of the American Heart Association and serves on the Red Cross Board as well as on the boards of Jewish Hospital & St. Mary’s Foundation, the Prichard Committee for Academic Excellence, the Jewish Community of Louisville, the National Council of Jewish Women, Louisville Section and the Clifton Cultural Center among others. She is a past board member of the Louisville Ballet and Stage One: The Louisville Children’s Theatre and the Discover Louisville Orchestra Board.

In April, she received the Hannah Solomon Award from NCJW, and in May was the recipient of an honorary doctoral degree in Public Service from Spalding University, where she chairs the Adult Accelerated Program Advisory Council. She has garnered many well-deserved awards and honors for her work including the Ira J. Porter Award from the American Red Cross, the Volunteer Fund Raiser of the Year Award from the National Society for Fund Raising, an honorary membership in the University of Louisville’s Golden Key National Honor Society in recognition of her commitment to higher education, the university and the community, and Metro United Way’s Leadership Award. She has been named the Caritas Foundation Community Leader of the Year and was selected as Citizen Laureate by the Younger Women’s Club of Louisville.

When time permits, Abramson enjoys reading and gardening and spending time with her husband and their son, Sidney Robert, a student at Bellarmine University.