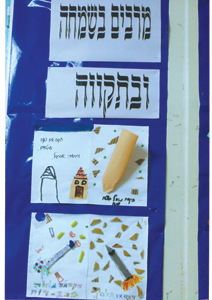 Fred Whittaker is a truly remarkable teacher. Committed to peace and justice, he inspires his eighth grade students at St. Francis of Assisi to act to make the world a better place.

Over the course of several years, his classes studied the lessons of the Holocaust and learned to value each person and enjoy the richness that individual and group differences bring to life. Inspired by Holocaust survivor Ernie Marx, z”l, Whittaker’s classes lobbied the Kentucky legislature, and last year succeeded in securing passage of a bill that advocates Holocaust education for all students in Kentucky.

As a peace educator seeking to broaden his own understanding of the issues in the Middle East, last July, Whittaker traveled to Israel and spent time in Sderot and the West Bank. It was the time he spent in Sderot that affected him most deeply.

Sderot is the Israeli town nearest to Gaza City. Its proximity to the Hamas-controlled Gaza Strip has made it the terrorist group’s most frequent target of rocket, missile and mortar attacks.

“I visited during a time of truce, or at least what was defined as a truce in the press,” Whittaker recounted, “which was in fact empty of meaning for everyone in Sderot, because the Kassams had continued to fall.

“I was taken to destinations that were at first glance seemed normal in appearance but like everything in Sderot, closer observation really reveals that this is a city immersed in trauma. Every detail from the trees to the buildings to the roadsides seemed normal at first, but if you keep looking you’ll notice it has evolved to exist in a place that’s constantly threatened with death.”

When Whittaker first looked at the trees in Sderot, he thought he was seeing the result of an insect infestation. “I was told to look more closely, and as I did it became clear the tree leaves were riddled with shrapnel holes.” He found this all over the city.

Whittaker observed many other signs of the siege wherever he went. “Many of the buildings, particularly the schools appeared to have brand new roofs built on top,” he continued, “almost as if an attempt to shade from sun.” These new roofs, however, were built to protect the young students from Kassams.

Everywhere he looked, Whittaker found “road signs with notifications of escape routes and markers detailing where the closest bomb shelter is, so that you quickly see that this is not a normal city. It’s a place of terror and trauma, and that terror and trauma really doesn’t’ dissolve away when the rockets stop falling.” He also found pockmarks and damage all around, evidence of the continuing onslaught.

As they toured southern Israel, Whittaker’s hosts from the Jewish Agency took him “to places that people would visit during their daily lives. We went to stores, a restaurant, schools, and kibbutzim, and I spoke with so many of the residents.

“I found two things that I felt were miraculous and beautiful,” he observed. “One was a very determined resiliency that despite conditions, they had chosen to live and to live as purposely and as joyously as possible.

“I found also, almost across the board, very determined compassion for the people who live across the fence, the Gazans, the Palestinians,” Whittaker stated. “Everyone I spoke to said, ‘We know they’re suffering at the hands of Hamas. And we are suffering, but what is there we can do?’

“One gentleman, the owner of a restaurant, told me that his property extends to the military border and no-man’s land that faces Gaza; and that he flew sheets with messages of peace [where his neighbors could see them] on a weekly basis. That really made me think,” he said. “I really wondered if … I could live with my trees shredded by shrapnel under sheet-iron roofing with my children plagued by nightmares, if I would be capable of printing out a message of peace on a sheet and flying it for my neighbors to see.” 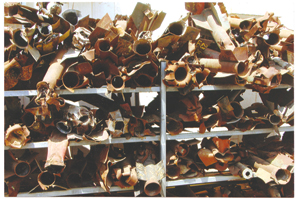 Whittaker’s interest in Sderot did not begin last summer. “Last year,” he explained, “my students [8th graders] began writing to two Amit schools – one for boys and one for girls. We exchanged e-mails and handmade letters and cards, which initially were based upon acknowledging and being made aware of the terror that occurs in Sderot.

“The students there wrote only about rockets and my students had questions only about what it was like.” But children often display wisdom more rapidly than adults, Whittaker asserted, and they soon realized, “there is so much more to life. They quickly got down to the important aspects of 14-year-old life and found beautiful commonality in likes and dislikes, musical trends, fashion, foods, jokes and even discussing whether or not they liked their teachers.

“I was inspired that they could get past not just the geographical distance, but the living situation differences,” he said. “I found that many adults are almost paralyzed when they have to confront individuals who have lived or are living in trauma. That trauma then becomes an individual’s identity almost wholly; there isn’t a lot of effort made to go beyond that.

In fact, he reported, “my students learned last year to write in Hebrew a little so we could correspond appropriately and the Sderot students got to practice their English.”

Along with understanding of their counterparts’ difficult situation, Whittaker’s students took their compassion the next step last year and “initiated some fundraising projects to help raise money for the students in Sderot. This year’s 8th grade has continued these projects. We hope to be sending what we have raised through lemonade sales and arts and crafts bazaars to the schools I visited.”

While in Sderot and other cities in southern Israel like Ashkelon, he said there was one message that his new friends pressed him to bring back to Louisville, the United States and the rest of the world: Don’t forget us.

“At the time I was visiting, Sderot and so many of the southern area towns were dealing with a desperate invisibility. They had a great sense that the entire world was blind to their situation. … Now the whole world has no doubt that they’re there and the whole world has been forced to look at the equation that produces that type of suffering which has engulfed everyone.”

“The Israeli army is seeking only to have a cessation of rockets, at which point they will consider themselves to be successful,” he pointed out, “whereas the goal of Hamas is the complete destruction of every Jewish man, woman and child,” starting with the children and adults of Sderot.

“I got to meet children,” he continued, “kindergarteners, who showed me with the great pride and glee that young children have when they’re playing games of which they are proud, how it was that they could make it to a bomb shelter in under 15 seconds” – the time they have between the sounding of the warning Tzeva Adom, Code Red, and the time the next rocket hits.

These young children “know that they’ve been targeted purposely and specifically,” Whittaker stated. “Terror works when there are no rockets and no bullets, and it can create so many other types of death.”

“I still see so many people attempting a cold calculus of suffering,” he continued, “whereby they factor in 6,000 rockets and only 30 or 40 deaths in the period of 3 years and can somehow reach the conclusion that there hasn’t been so much suffering or that it’s intermittent. What I saw was a city almost through a fog of horror and yet through that I saw wonderfully courageous people trying to live their lives.

“The suffering in Sderot is deep and infinite. It’s disconnected from any equation that uses statistics and numbers to define an amount.” With passion and deep emotion, he continued, “We’re talking about the suffering of five year olds. We’re talking about first graders who play games so they can learn how to move quickly into a bomb shelter. We’re talking about trees and fences and signposts everywhere scarred by shrapnel. And I don’t see how the world cannot understand that it needs to stop.”

Whittakers trip was made possible in part by a grant from the Jewish Community Federation’s Foundation for Planned Giving.