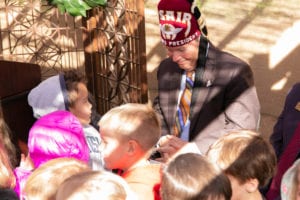 Keith Inman, president of Kosair Charities, looks on as children from The Early Learning Center sing at a press conference in The J’s sukkah. The media event was called to announce that the capital campaign for a new center on Dutchmans Lane had reached the $30 million milestone. (Community photo by Jessica Budnick)

In announcing that the Jewish Community of Louisville is closing in on its $40 million goal to start construction on the new J at Dutchmans Lane, Sara Klein Wagner couldn’t help but draw parallels to the festival of Sukkot.
At a press a conference held Thursday in the sukkah outside The J – the first time a media event is believed to have been held in that booth – Wagner, president and CEO of the JCL, told the gathering of reporters, dignitaries and Jewish leaders that the sukkah is a temporary dwelling, originally used to house the Israelites as they made their way out of Egypt and to the Promised Land.
Now, the current center – The J’s home since 1955 – will make way for a new facility at the back of the campus. Groundbreaking is expected to happen in 2020.
“It takes transition to get from one point to the next,” Wagner said.
The “Our Community. Our Future.” capital campaign, organized to raise the funds needed to build a state-of-the art J for the 21st century, has surpassed the $30 million “milestone,” securing commitments from about 120 donors.
“We’re going to do this,” said JCL Board Chair Jon Fleischaker, who announced the milestone. “We’re going to get this done.”
Aside from the Jewish Heritage Fund for Excellence, which made a $10 million “cornerstone” gift and a $15 million matching grant last year to kick off the campaign, four major givers were introduced to  the community at the press conference: Kosair Charities, WHAS Crusade for Children, the James Graham Brown Foundation and the Gheens Foundation.
The Brown Foundation committed $500,000 to the project; Kosair, $250,000; Gheens, $100,000; Crusade for Children, $85,000.
The next milestone will be $34 million, at which point, the JCL will launch the public phase of the capital campaign and meet its goal.
Keith Inman, president of Kosair Charities said, the work The J does dovetails with his organization’s mission.
“This is a community that helps the fragile, that helps the strong,” Inman said. “It helps those who are challenged and helps those of abundance. It helps the entire community, and that’s what Kosair Charities is about as well.”
Barry Allen, president and treasurer of the Gheens Foundation, quoted from The J’s own grant application when he said his founders would be pleased to know The J’s mission, “which focuses on “the heart, the mind, the body and the soul of all it serves, will now be a part of their stewardship legacy.”
Dawn Lee, president and CEO of the WHAS Crusade for Children, which has supported Camp J for the past five years, said her organization sees its gift as an “opportunity” to expand the partnership.
“This group makes such a conscious decision to include children who have special needs in their camp programs,” Lee said of The J. “For us, that’s what made the difference.”
Mason Rummel, president and CEO of the James Graham Brown Foundation, said The J project was in keeping with the directions its founder, James Graham Brown, left in his will to do things that improve the image of  Louisville and the state by helping its people.
She also said the foundation’s grant marks a continuation of a giving tradition Brown established with The J, then known as the Jewish Community Center, going back to the 1950s.
“You all are doing exactly what we think we are supposed to be doing, too,” Rummel said. “The partnership is an honor.”
To cap the program, Norma Cahen, director of early learning at The J, explained the significance of the lulav and etrog, which are taken up by Jews on Sukkot. Then 30 children from the Early Learning Center sang two songs for the crowd.
In acknowledging the capital campaign chairs – Jerry and Madeline Abramson, Frank and Barbara Weisberg and Dr. Jeffrey Tuvlin – Wagner noted that the work to make a new center possible has been going on for quite a while.
“We’re on a journey right now, and the most exciting part of about being gathered here in our sukkah … is that we have been on a journey for close to a decade,” she said. “We’re so excited to be turning a major corner, but we didn’t do it by ourselves.”
Traditionally, she told the audience, the roof of a sukkah is left incomplete, so whoever dwells in it can see the stars at night.
“That’s exactly what we’re doing as we reach for the stars in building the next iteration of what the JCC will be for Louisville,” Wagner said. “I invite you … to dream a little bit with us about the generations of people that are going to take advantage of being with us, of engaging and growing every day.”