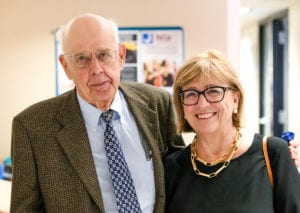 Writer, poet and activist Wendell Berry, pictured here with his daughter, Mary Berry, urged everyone “go beyond nationality … beyond humanity” to achieve unity, in his acceptance speech for the Blanche G. Ottenheimer Award. (Community photos by Jessica Budnick)

The dark around us, come,
Let us meet here together,
Members one of another,
Here in our holy room,
– From X, by Wendell Berry

What else would the greatest Kentucky poet extant do when accepting an award from the largest Kentucky Jewish body? Of course, he read a poem.
Wendell Berry, this year’s Blanche G. Ottenheimer Award recipient, offered the poem, X, which he wrote 37 years ago as a gesture of “thanks” to the Jewish Community of Louisville for presenting him with its highest honor.
“When I wrote it, I was thinking, as I am still thinking, that in our pressing need for a common denominator to unite us, we will have to go beyond nationality and beyond humanity,” he said. “We will have to go all the way to life itself, to the great community of living creatures for which power and religious inheritance in fact beckon us again and again.”
Berry said he wrote the poem in the woods, where the limited visibility “describes a sort of room,” recalling Dante as he ascended to heaven, looking down to earth, which looked like “a threshing room floor.”
The poem concludes:

Here on our little floor,
Here in the daylit sky,
Rejoicing mind and eye,
Rejoining known and knower,

Light, leaf, foot, hand, and wing,
Such order as we know,
One household, high and low,
And all the earth shall sing.

The Ottenheimer Award recognizes outstanding work for political reform, youth education and the elimination of prejudice. Berry, a “writer and farmer,” according to his daughter, Mary, who introduced him, has spent a lifetime fighting for land conservation.
His poem was a highlight of the JCL’s 10th Annual Meeting on Wednesday, June 5. A yearly event, it is the time when awards are given to teens, young adults and seniors for their achievements and contributions to the community, while updating Jewish Louisville on news from the past year and electing board members.
JCL Chair Jon Fleischaker acknowledged four outgoing leaders: Rabbi Stanley R. Miles, who is stepping down as chair of the Jewish Community Relations Council (JCRC); Amy Ryan, Program Cabinet chair; and Ariel and Faina Kronenberg as co-chairs of the Annual Campaign. 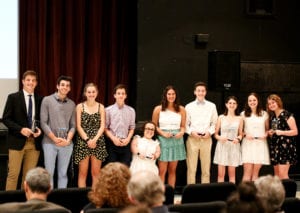 Fleischaker said the Kronenbergs stepped up to run the campaign at a difficult time.
“They had real challenges that weren’t there every year,” he said. “In view of that, what they have accomplished this year is very admirable.”
In a nod to the future, Fleischaker and JCL President and CEO Sara Klein Wagner addressed the crowd as an artist’s rendering of the future J appeared on the screen behind them. JCL officials hope to break ground on the facility by the end of the year.
Wagner also reflected on a year of tragedies in the Jewish world, which brought all of Jewish Louisville together: the vigil at Temple Shalom for the victims of the Tree of Life shootings in Pittsburgh, and the program at The J following the attack on the Poway Chabad synagogue in California.
“A new reality became a new truth,” Wagner said.
But she pointed with pride to the Bikes and Bourbon event last October, which bought Jews from Louisville and Israel together.
And she noted that this year’s Louisville’s Got Talent, the last one hosted by Jake Latts before leaving for college, capped six years during which the show has raised $52,000 for CenterStage’s Acting Out school program.
An array of teen leaders were honored at this year’s awards meeting: Hannah Geller and Elizabeth Hemmer (Ellen Faye Garmon Award); Drew Goldstein and Elana Berger (Stacy Marks Nisenbaum Award); Jillian Lustig, Emily Renco and Eli Resnik (Stuart Pressma Student Leadership Development Awards); Gabrielle Aberson and Adam Rudy (Tony Levitan Awards); and Jacob Ioffe (Joseph Fink Community Service Scholarship). 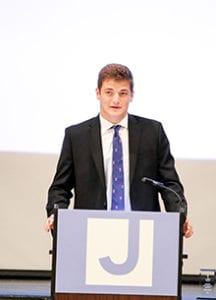 Jacob Ioffe spoke for all teen award recipients as he thanked the community for making him “the Jewish adult that I am today.”

Speaking for all the teen recipients, Ioffe said, “This is a community I constantly fell back on in high school. Without it, I wouldn’t be the Jewish adult that I am today.”
The other honorees were Jordan Green (Joseph J. Kaplan Young Leadership Award); Cari Hatch (Lewis W. Cole Memorial Young Leadership Award), Beth Salamon (Julie E. Linker Community Relations Young Leadership Award), Bruce Roth (Ronald & Marie Abrams Volunteer of the Year Award), Johnny Kimberlin (Arthur S. Kling Award), and Victoria Carpenter (Elsie P. Judah Memorial Award), who accepted the honor while cradling her granddaughter, Jenny.
Also at the meeting, the JCL elected a new slate of members to its governing board. Amy Ryan, David Kaplan and Linda Spielberg were approved for a three-year term; Dr. Mark Behr, Robin Miller and Ben Vaughan were re-elected for a second three-year term; Beth Salamon will serve as the JCRC chair; and Rabbi Beth Jacowitz Chottiner was elected as the Louisville Board of Rabbis and Cantors president.
The officers for the coming year will be Fleischaker (chair), Dr. Ralph Green (chair-elect), Dr. Jeff Tuvlin (vice chair), Dr. Jeff Goldberg (treasurer), Becky Ruby Swansburg (secretary) and Jay Klempner (immediate past chair).

Jewish Louisville finally has an action plan for moving the worship community – and perhaps the community as a whole – forward. Rosov Consulting, the California-based firm that was retained about a year ago to do a synagogue sustainability study, …