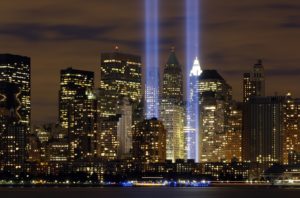 The “Tribute in Light” memorial is in remembrance of the events of September 11, 2001, in honor of the citizens who lost their lives in the World Trade Center attacks. The two towers of light are composed of two banks of high wattage spotlights that point straight up from a lot next to Ground Zero. The ÒTribute in LightÓ memorial was first held in March 2002. This photo was taken from Liberty State Park, New Jersey on September11, 2006, the five year anniversary of 9/11. USAF photo by Denise Gould………

Everyone has a 9/11 story to tell. Jewish Louisvillians are no exception.
U.S. Coast Guard Chief Warrant Officer James Todd (Ret.) was the first military commander to respond to the attack on the World Trade Center in New York, directing evacuations by boat from Manhattan.
Aliza Weinstock, the daughter of Rabbi Robert and Deborah Slosberg, passed out sandwiches to first responders at Ground Zero.
Alan Engel, then president of the Jewish Federation of Louisville, assembled community leaders to discuss ways to keep the community safe.
And Sara Klein Wagner, then director of the Jewish Community Relations Council, represented Jewish Louisville at an interfaith service following the attacks.
Each experience offers a different perspective on the worst attack on American soil since Pearl Harbor.

Todd, who recounted his experiences at Temple Shalom’s Shabbat service on Sept. 10, was the commander of Coast Guard cutter USCGS Hawser, which had just returned from a 10-day patrol of the Hudson River and Erie Canal.
The morning of 9/11, he was having breakfast at a diner near his home port in Bayonne, New Jersey, when he heard a plane had struck one tower.
At first, he thought it was an accident, but by the time he reached his base, the gate was already on lockdown. “That’s when I found out it was a terrorist attack.”
Since much of his seven-member crew was ashore, he found an electrician’s mate and engineer to steam with him to Manhattan, where he found he was the only military officer present.
“Everyone was looking to me to figure out what to do,” he recalled. “I had to make a determination. It was a terrorist attack; the towers were on fire. Were there chemical, biological and nuclear weapons involved as well? Quite frankly, I was looking at the shoreline to make sure Manhattanites were staying upright and not falling down.”
Todd directed evacuation efforts with scores of tugboats nearby, ordering vessels to make pickups or help in any way they could.
“We were fashioning makeshift air masks out of cloth paper towels, rubber bands and staples,” he said. “We were ladling out water to people.”
As bad as the situation was, it got worse.
“We stood and watched as people made their decision to jump to their deaths or burn in the fire,” Todd said, his voice choking. “I never felt so helpless in my entire life.”
Then his third-class machinery technician collapsed into the fetal position. His wife was supposed to have been in the towers that morning, applying for a job.
“Unfortunately, we needed all hands on deck and I had to motivate the engineer, get him off the deck and onto his feet,” Todd said. “It wasn’t my proudest moment in leadership.”
(Todd learned later that the technician’s wife had missed the interview and was not in the towers during the attack.)
Eventually, Todd’s cutter was relieved, but not done. In the coming days, he said, his crew responded to scores of bomb threats.
As the towers fell, Todd’s cutter became covered in small-particle debris, six inches deep in some places
But the worst part was the “taste” of that day
“I just remember most breathing in that taste,” he said. “Three to four times a week [afterwards], I’d wake up in a puddle of my own sweat, and the first thing I’m aware of is the bitter taste of burnt plastic, hot metal, cigarette smoke and chemicals.”

Weinstock had a different view of the events. The 18-year-old freshman at Barnard College was taking a break from a Hebrew class when someone said a plane had hit a tower.
Recounting the experience during Adath Jeshurun’s Sept. 11 Shabbat service, Weinstock said Barnard was eight miles north of Ground Zero. Nevertheless, the instructor dismissed the class. Weinstock and other students rushed to the Jewish Theological Seminary dormitories to catch TV reports. There, they saw the second plane hit.
Soon, a bomb threat was phoned in to the dormitories and everyone was sent to the basement to wait for the all-clear.
The next day, Weinstock and her friends, anxious to help, made a basket of sandwiches and took the subway downtown to pass them out to first responders. They did that for a couple days.
Months later, though, Weinstock was diagnosed with asthma. She never had that condition before and still wonders if it was Ground Zero-related.
After 9/11, Weinstock said, New Yorkers braced for another attack – possibly anthrax, or an attack on the subway. “Any time the train jerked, or stopped, everyone just held their breath.”
She also has being subjected to airport security checks, likely because her name didn’t sound “American.”
However, what she remembers clearest is the way the attacks have colored everything she knows about New York, a city where she had lived for just one week before the towers fell.
“I really don’t have many memories of New York before the attacks,” she said. “I really don’t know a version of New York without this.”

For Engel, the most memorable part of that day was how Jewish Louisville responded to it.
He was meeting with Karen Abrams and Robin Miller at his office at 9 a.m., Sept. 11, when Steve Shapiro came in and told them to turn on the TV.
“We turned it on, and we saw the second plane hit the tower,” Engel said. Abrams left for Eliahu Academy, where her kids went to school, while the others sat there watching.
“We were stunned,” Engel said. “We were really speechless.”
Not far from the campus, Wagner was at a meeting at the Louisville Presbyterian Theological Seminary. During a break, she noticed a crowd gathering around a TV at the receptionist’s desk. That’s when she learned of the attack.
“I remember thinking about my kids,” she said, “but as JCRC director, I was also thinking, ‘Is there a connection to Israel with this?’”
Engel soon called a meeting of community leaders to decide how to respond.
“We discussed some plans, what we would do,” he recalled. “Obviously, we needed to be in touch with the police, which we were, and we talked about getting in touch with the congregations and really just taking the lead, so the congregations and agencies knew we were on top of it, and we did that.”
Those initial meetings – and a later incident in which an unidentified caller threatened to murder Jews – led to the hiring of a security firm.
“I think it (9/11) was a wakeup call,” Engel said. “We needed to be a little more vigilant. We couldn’t take things for granted.”

For Wagner, the takeaway was the way the community came together. “The first thing we did as communal leaders was get ourselves in a room together – that was our first instinct – and figure out who could do what and be there for each other,” she said.
The Jewish community gathered for a service that evening at The Temple. The next day, at Broadway Baptist Church, Wagner shared the pulpit with Christian and Muslim leaders for an interfaith program
She also remembers going home that day, wondering how she would tell her then-8-year-old, Talia, what had happened, but Talia had already heard at school.
“I remember looking at her when she went to bed that night, thinking that her world would never the same.”
No one’s world would.