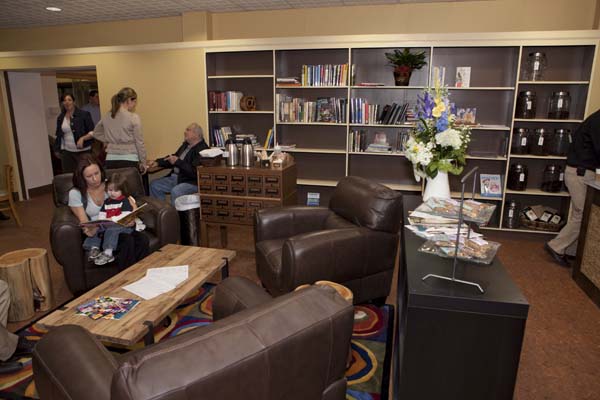 The story of the kosher Java Brewing Co. restaurant located in the Naamani Library of the Jewish Community Center is a story of dedication to the community and the commitment of a cadre of volunteers working with entrepreneurs, staff and contractors to realize a dream.

Louisville has been without a kosher restaurant for more than two years, so when the prospect of bringing Java Brewing to the JCC arose, Ed Goldberg stepped forward to chair the project. Working with Jewish Community of Louisville Board Chair David Klein, President and CEO Stu Silberman and the JCL Board, Java Brewing Co. owners/operators Chris and Toni Lavenson, their colleague Chuck Schnatter, and Bornstein Building’s project manager Todd Benovitz, a plan was developed to modify the Naamani Library and the Patio Gallery to accommodate the restaurant.

There are many things that must be taken into consideration to ensure that a restaurant is kosher, and that means extra investment before the doors open. Goldberg recruited Max Behr and Jake Wishnia to help him, and together, they raised the money necessary to underwrite the project. A full list of the generous donors to this project can be found at the end of this article.

“Ed spearheaded the whole project,” Behr said, “and he did a great job.”

Wishnia also worked with the Vaad HaKashrut and Java’s corporate office to ensure the plant where the coffee is processed as well as the restaurant itself are kosher.

The next step in preparing the space was going through the Naamani Library’s collection. Evie Topcik assembled a committee to do the work. The books and videos had to be removed quickly so construction work could begin. Much of the sorting and culling was left for later.

Topcik assembled a committee including Ed and Marcia Segal, Kim Russman Reinhardt, Judy Olson, Nathan Goldman and Linda Goldberg for this large and ongoing task. Much of the library’s collection is out of date, and many volumes show the wear of the years. The entire collection was boxed and stored.

The new space has attractive shelving that can hold a significant portion of the collection, and plans include a space for the library’s DVD collection as well. Topcik’s team is working its way through the boxes and the refreshed and revitalized collection in the Naamani Library is gradually growing and filling the shelves.

Contractors, architects and restaurateurs can draw up the plans, but it takes an interior designer to bring their ideas to life and make the space comfortable and inviting. Robin Miller, a professional designer who works with the Lee W. Robinson Co., joined the project around Thanksgiving, and worked tirelessly to complete the project by the restaurant’s January 17 opening.

Building on the design concept established by Java’s brand and the Lavenson’s commitment to sustainable products, Miller focused on recycled and repurposed materials to bring it together quickly. The discarded card catalog became the condiment stand. The back counter is bamboo and the front counter is ice stone, which is made from recycled products, and recycled wood products.

“The wine bottles for the lighting came from a friend of mine whose daughter owns Turtle Run Winery,” she continued. “I knew they used blue bottles, and they gave us empty wine bottles that had been used and we turned them into the fixtures.”  Local glass artist Fred Difrenzi helped with that.

Miller pointed out that the blue color of the bottles picked up the blue from the ice stone counter and the tiles in the JCC lobby.
Miller also designed the layout of the furnishings, creating a warm welcoming place where people can read a book, enjoy the art, have a cup of coffee and visit with friends.

Behr summed up the project, “A key concept was to do something we could be proud of.” The facility we have today, he observed, is “very nice. Robin Miller did a masterful job.”

The JCL thanks all the volunteers on this project for their hard work and all the donors who made it possible.