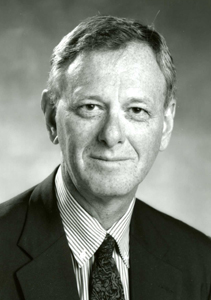 Melvin I. Urof-sky, author of Louis D. Brandeis: A Life, will receive the Brandeis Medal and deliver the Brandeis Lecture on Thursday, April 1, from 1-2 p.m. in Room 275 at the University of Louisville Brandeis School of Law. The free event and book signing is open to the public. During the lecture, Urofsky will speak about Justice Brandeis and his clerks.

Urofsky will also speak at The Temple on Friday, April 2, at 7:30 p.m.. He plans to talk about Brandeis, Zionism and Israel, arguing that “the way Brandeis transfigured American Zionism 90 years ago continues to have an effect on the relationship between Israel and American Jewry.”

A professor of law and public policy and professor emeritus of history at Virginia Commonwealth University, Urofsky began writing about Brandeis nearly 40 years ago. “I was teaching at Ohio State,” he explained, “and my dissertation was supposed to be on Brandeis and [Woodrow] Wilson.” His research brought him to Louisville, where he saw the papers at U of L, but decided there was not enough material for a dissertation, “so I did another topic.”

Still, the papers held interest for him, so later, “David Levy and I got permission from the University to edit the Brandeis letters and the National Endowment for the Humanities gave us a grant to do it. From there, I wound up doing some books on Brandeis.”

Urofsky grew up in an Orthodox community. “I’ve been involved on and off in American Jewish history,” he said, “and for years was head of the Academic Council for the American Jewish Historical Society. I’m involved with the Zionist movement, and have been to Israel a number of times.”

While he is very pleased to win the Brandeis Medal, he believes “it honors Brandeis more than me. The book has been well received,” he continued. “It won the Jewish Book Council Award, and was shortlisted for the Los Angeles Times and other book prizes.”

He was a Rich Fellow at Oxford University’s Center for Jewish Studies, a Fulbright Lecturer at the University of New South Wales Law School in Sydney, a Rockefeller Foundation Fellow at the Bellagio Center in Italy, and a visiting scholar at Ben-Gurion University in Israel. Under the auspices of the State Department he has lectured in Europe, Asia and Australia, and has spoken at many colleges and law schools in the U.S.

Among the 52 books he has either written or edited are seven volumes of the Letters of Louis D. Brandeis (with David W. Levy); American Zionism from Herzl to the Holocaust (1975; winner of the Jewish Book Council Kaplun Award); We Are One! American Jewry and Israel (1978); A Voice that Spoke for Justice: The Life and Times of Stephen S. Wise (1981); A March of Liberty: American Constitutional History (1987; later editions with Paul Finkelman); A Conflict of Rights: The Supreme Court and Affirmative Action (1991); Letting Go: Death, Dying and the Law (1994); Division and Discord: The Supreme Court under Stone and Vinson, 1941-1953 (1997); Lethal Judgments: Assisted Suicide and American Law (2000); and Money and Speech: The Supreme Court and Campaign Finance Reform (2005).

He writes widely on constitutional history, and has been the editor for the past seventeen years of the Journal of Supreme Court History. His newest work, Louis D. Brandeis: A Life, was published by Pantheon in September 2009. He also serves as historical consultant to the Touro Synagogue Foundation, and has been a consultant to many other groups, including the Virginia Historical Society.

He and his wife, Susan, live in Gaithersburg, MD. They have two sons, two daughters-in-law, and three grandchildren.

The Brandeis Medal, awarded by U of L’s Brandeis School of Law, was established to recognize individuals whose lives reflect Justice Brandeis’ commitment to the ideals of individual liberty, concern for the disadvantaged, and public service.  Past recipients have included Supreme Court Justices Sandra Day O’Connor, Ruth Bader Ginsburg, and Stephen Breyer.

(The formal biographical information in this article was provided by U of L in a press release.)