Rabbi Uri Regev delivered a bleak message to Louisville last week: Israeli Jews are facing a threat to their country’s future, and they need help.

He wasn’t talking about an external threat from Hamas or Hezbollah. He meant internally, from the Chief Rabbinate of Israel, an ultra-Orthodox body that has a stranglehold upon religious affairs in the Jewish state – particularly marriage and conversions.

“What is at stake is the soul of Israel and the future of the Jewish people,” Regev, the leading voice for progressive Judaism in Israel today, said Friday during lunch at the J for local rabbis, cantors and lay leaders.

Just how serious is the issue? Regev, who is president and CEO of Hiddush a religious freedom and equality group in Israel, says 666,000 Israelis today cannot legally marry; that figure includes some 350,000 Jews from the former Soviet Union who do not have a Jewish mother.

Lest anyone think this is Israel’s problem alone, Regev dropped a bombshell, estimating that the majority of Jewish young people growing up in America today, if they had to, could not prove to the chief rabbinate’s satisfaction that they are Jewish.

So a wedge is developing between Israeli and American Jews that threatens to divide the two communities. 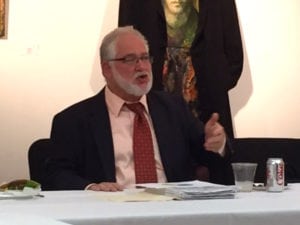 Something, he said, must be done.

Regev’s is not a minority voice. According to a recent survey conducted by the Rafi Smith Polling Institute for Hiddush, 71 percent of Israeli Jews consider the dispute over marriage and divorce freedom in Israel to be one of the two most important religion-state issues of the day. And 60 percent support the involvement of American Jews in advancing the cause of marriage freedom in Israel.

The survey, which was conducted on March 29, polled an online panel of 500 individuals, representing a sample of the adult Israeli Jewish population. It asked the sample group about their priorities regarding the battles over religion and state in Israel, as well as their attitudes towards the involvement of Diaspora Jewry in these battles.

“Without exception … in all questions of religion and state, the overwhelming majority of Israelis share your values and my values,” said Regev, an ordained rabbi in the Reform movement. “They want religious freedom.”

It’s understandable why. Increasingly, Israeli Jewish couples prefer Reform or Masorti (Conservative) marriages, or even civil weddings, but the chief rabbinate, because of its political influence over the government, which stays in power with the help of small ultra-Orthodox parties, continues to be the only recognized authority over Jewish marriages and conversions in the country.

Which probably accounts for why more Jewish couples are choosing to live together without getting married.

“We just came out with a figure that shows there’s a continuous drop in the number of Israeli couples that marry in the rabbinate, and a dramatic rise in those that choose to cohabitate without marriage at all – 30 percent in the last few years,” Regev said.

“What an irony!” he said, almost shouting. “The chief rabbinate has become the major reason why Jews refrain from marrying!”

The problem is not confined to liberal Jews. More and more, as Regev noted, conversions by modern Orthodox rabbis are not being recognized by the chief rabbinate.

Promisingly, Regev lauded the Jewish Federations of North America and the AJC for stepping up and trying to loosen the chief rabbinate’s grip on religious matters – the federations through the Israel Religious Expression Platform (iREP), and the AJC through its Jewish Religious Equality Coalition (JREC).

He urged the Louisville Jewish Community to support these efforts.

“It’s important for [Israel] to understand that they have the backing of the Jewish community, not just the top six [communities] in the country, and it’s important for you to know that you’re part of that endeavor,” Regev said. “There may not be a lot you can do by yourselves in Louisville, but together with other Jewish communities, there is nothing you cannot do.”

Regev knows of what he speaks. A lawyer as well as a rabbi, he came to prominence in 1992 when he successfully argued the “Who is a Jew” case before the Supreme Court of Israel.

He was the executive director and founding chair of the Israel Religious Action Center and served seven years as president of the World Union for Progressive Judaism – the global arm of the Reform movement.

While in Louisville, Regev also spoke to the Jewish Community Relations Council, and he delivered an impassioned Shabbat sermon, at the Temple to a packed sanctuary of The Temple and Temple Shalom members.

In introducing him, Rabbi David Ariel-Joel, of the Temple a, personal friend of Regev’s, said, “When you ask Israelis about religious pluralism, the name that will come out is Uri Regev.”

Rabbi Regev’s visit to Louisville was the result of a collaborative effort. The American Jewish Committee hosted a lunch for the JCRC. The Jewish Community of Louisville, with assistance from Rabbi Robert Slosberg, hosted a meeting for Louisville’s Jewish clergy and some community leaders. The Temple and Temple Shalom jointly hosted the Friday evening service at The Temple; and The Temple hosted the Saturday morning Shabbat service.

The Louisville contingent of Lions of Judah joined over 1,300 women from across North America and around the globe at the International Lion of Judah Conference in Washington, DC, earlier this month. I was honored to experience the ILOJ conference with …

Sukkot is the harvest festival which symbolizes the transitional period when, after escaping Egypt, the Jews lived in temporary shelters while wandering through the desert for 40 years. This year, The J is putting a Kentucky twist on the holiday …