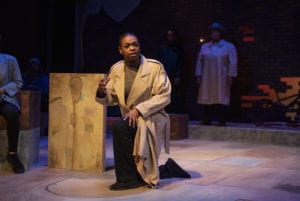 Dress rehearsal scenes from “Fires in the Mirror,” which played in November at the Thrust Theatre on the UofL campus. (photos courtesy of the University of Louisville)

It’s been 28 years since the Crown Heights Riots scarred relations between blacks and Jews. For many, that wound has not healed.
But some healing just took place as the University of Louisville Department of Theatre Arts presented Fires in the Mirror, a play about the riots, and their fallout, by Anna Deavere Smith.
The production, which closed on Nov. 17 at the Thust Theatre, explored the 1991 riots in the Crown Heights section of Brooklyn from several perspectives – black and Jewish. The purpose being, according to director Ariadne Calvano, that different people see events in different ways.
“There’s more than a African American or a Jewish perspective,” Calvano said. “That’s the thing about this play; it’s challenging us to see beyond the perspective we were raised in.”
The play also looks at identities and how people “negotiate” them to fit their community and circumstances.
One actress, playing a Chasidic woman, described covering her head with a wig. In some ways, she said, she felt “eager” to do it and “in some ways, it’s fake, it’s not me.”
The Nov. 14 performance was followed by a panel discussion of local leaders – black, white and Jewish – on issues raised by the play. 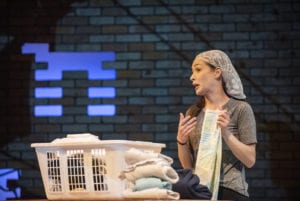 The riots, which lasted from Aug. 19 to 21, 1991, were sparked by an incident in Crown Heights when a car driven by Yosef Lifsh, a Chasidic man, jumped a curb, killing Gavin Cato, a 7-year-old black Guyanese boy riding his bike.
The car was part of a motorcade for Rebbe Menachem Mendel Schneerson, the spiritual leader of Chabad-Lubavitch Judaism.
In the ensuing three days of violence, Yankel Rosenbaum, a Hasidic rabbinical student, was stabbed to death in an apparent act of retaliation.
In all, more than 600 people took part in the rioting, which exposed long-simmering tensions between the two communities.
Performing on a sparse stage (a park bench, a streetlamp, a trash can, a brick wall), the cast of eight – black and white – assumed roles beyond their own races and genders. Blacks played whites; Christians played Jews; men played women; women played men.
But all spoke lines from actual witnesses, bystanders and religious leaders who were affected by the riots.
The performers addressed the audience, never each other.
Some of the lines were disturbing, even anti-Semitic and racist.
For instance, actor Manuel Francis Viveros, who played Nation of Islam Minister Conrad Mohammed, downplayed the tragedy of the Holocaust when compared to slavery. (After the performance, Rabbi David Ariel-Joel, who joined the panel discussion, said he was offended by those words.)
But the lines reflected the tone of the time. This was not a sanitized performance. The actors gave voice to all the hatred, fear, sadness and accusations that rushed from the riots.
Drawing the audience into performance, questions related to the monologues were flashed on the brick wall throughout the performance, inviting theatergoers to text replies. The answers appeared in real time on the walls getting larger or smaller as more people texted the same responses or added new ones.
Among the questions were, “In what space are you most yourself?” “In what community do you feel most anchored?” “Describe New York City in one word?” 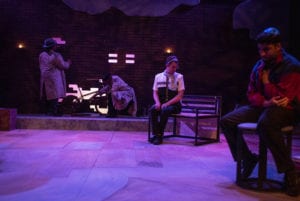 That brick wall proved a provocative touchstone throughout the play. Solid at the opening, sections of brick were taken out as the sound of car crash filled the theater, revealing a children’s bicycle – symbolic of the one 7-year Gaven rode when the car struck him. At the play’s end, though, two actors – one portraying a black person, the other a Jew – helped each other put the bricks back.
Janna Segal, assistant professor of theatre arts at UofL who moderated the panel discussion, said the play prompted her to consider different perspectives within her own identity.
“I learned about the Lubavitch faith and culture doing research for the show, but I wasn’t raised in the community itself, even though I am Jewish,” Segal said. “I still have to learn and cross the bridge to understand, even though I’m under that larger [Jewish] umbrella.
Asked how Louisville shapes people’s identities, panelist Marian Vasser, UofL director of diversity education, said no spaces in this city were designed with black values and customs in mind.
“Every single space I have to go into, I have to change,” said Vasser, who is black.
Cathy Hinko, executive director of the Metropolitan Housing Coalition, reflected on Louisville’s segregated past, its history of “redlining” black neighborhoods and their effects on black identity.
Ariel-Joel said he sees Louisville through as a Jew, an American and an Israeli.
Jews have been negotiating our identity since the beginning of our story,” he said, “always being influenced by the cultures who surrounded us, almost all our history we were a minority.
“But that’s a good thing,” he added. “If you’re segregated and live only in your community, then you wind up where everyone has their own truth.”