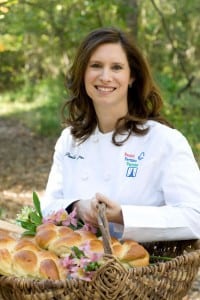 Paula Shoyer, the author of The Kosher Baker and Holiday Kosher Baker who has appeared on Food Network’s “Sweet Genius,” is coming to Louisville and a limited group of people will have the opportunity to prepare Passover desserts with her.

Anyone interested in Passover baking is invited to enjoy a baking demonstration with Shoyer that includes a Passover wine tasting, light appetizers and a dessert reception beginning at 6:30 p.m. Admission for this event is $36 per person or $18 for those age 29 and under.

For those who are interested in a more in-depth experience with Shoyer, a VIP Event Afternoon is planned. Participants will gather at noon for an afternoon of baking, schmoozing and lunch at a private home. Shoyer will share her culinary expertise with a small, intimate group, and together, they will prepare the Passover-friendly desserts that will be served that evening. The VIP experience is $100, but it sold out just before Community went to press. To add your name to the waiting list, contact Kristy, 238-2739 or kbenefield@jewishlouisville.org.

“Both Linda Spielberg and I enjoy cooking,” said Event Co-Chair Linda Schuster, “and this is something we think will be fun and different to bring cooks and people who like to eat together as a way to enjoy our Jewish tradition.”

It’s also an opportunity to learn something. “I didn’t know there were kosher wines that are delicious,” she explained, “but I understand that there are wonderful wines that go well with kosher foods to make great meals.” She’s looking forward to sampling some of them at the Passover Dessert Event.

“We’re planning to make this the first event in a Uniquely Jewish cooking series,” Event Co-Chair Linda Spielberg said. “It will probably be four events, each featuring a different chef.” There will probably be a summer barbecue event, one for Rosh Hashanah and one for Chanukah.

“We want this event to be a intergenerational, social thank-you event for Federation donors,” Spielberg added. “We want mothers, daughters and grandmothers to come and experience Jewish Louisville in a fun way.”

“One of the neat things about this event is that it will be at 610 Magnolia in their Wine Studio,” Schuster noted. “It’s a really great space – very different from other places. It has both an outdoor and an indoor kitchen …surrounded by Ed Lee’s cooking.”

“I’m excited about getting the Jewish community together for this event,” Spielberg said, “and I look forward to seeing everyone there.”

Space is limited for both events, so reserve your place before Friday, April 4, with Kristy at kbenefield@jewishlouisville.org or 238-2739. Online registration is also available at www.jewishlouisville.org/event/passover-dessert/. Participants will have the opportunity to make a pledge to the 2014 Federation Campaign.

Paula Shoyer is a pastry chef who owns and operates Paula’s Parisian Pastries Cooking School in Chevy Chase, MD. She received her pastry diploma from the Ritz Escoffier Ecole de Gastronomie Francaise in Paris, France in 1996.

A former attorney and speechwriter, Shoyer took advantage of living in Europe and enrolled in a pastry course in Paris for fun. After being asked to bake for friends, she ended up operating a dessert catering business in Geneva, Switzerland for two years.

While in Geneva, she was asked to teach a few classes to raise money for Jewish organizations – in French. When she returned stateside, she began teaching classes in French pastry and Jewish cooking and baking to adults and kids, both in the Washington, D.C. area and all around the United States.

Shoyer’s classes have been featured in Daily Candy, Washington edition, and in the Washington Post Express. She also has experience teaching cooking to special needs kids and adults, which was profiled in the Massachusetts Jewish Ledger.

The Kosher Baker has been featured in publications all over the United States and Canada and websites including the kitchn, epicurious, koshereye, tablet magazine and joyofkosher.

To RSVP for the evening Passover Dessert event, contact Kristy, 238-2739 or kbenefield@jewishlouisville.org.

Local Jewish youth have the chance this spring to help the community get clean, green and more connected to people of other faiths. The Jewish Community Center of Louisville is working in partnership with The Center for Interfaith Relations, the …

Happy spring! This is a time of rejuvenation and rebirth – a time when we are reminded of the beauty of nature and the promise of warmer weather on the horizon. We have already turned the clocks forward and sunset …