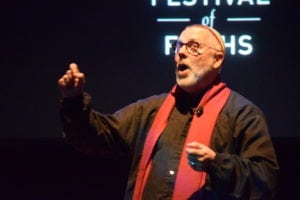 Sitting alone on the stage of the Bomhard Theater, Rabbi Rami Shapiro rang a singing bowl, calling the 230 people in the hall to meditation.

But he also led the audience in chanting Elohai N’shamah, celebrating the purity of the soul God has placed in each individual.

Shapiro, a Reform rabbi who was raised Orthodox and has studied with the likes of Rabbis Mordecai Kaplan, Zalman Schachter-Shalomi, Arthur Green, Arthur Waskow and Sherwin Wine, sees no conflict between the two religions (he prefers to call them “wisdom traditions”).

The noted author, spiritualist and public speaker says the wisdom of each tradition’s mystics is essentially the same, even if they take different journeys to achieve it.

“Each [religion] has its own uniqueness and own focal point,” Shapiro said, “but the mystics are rooted the same realization.”

Shapiro opened the 22nd Annual Festival of Faiths Wednesday, April 19, with his prayer program. Though accented by the eastern religions of Buddhism and Hinduism, which he has studied over the years, it was a uniquely Jewish program. He led the audience in a Chasidic melody, taught the event-goers a little Hebrew (he projected the Hebrew, English and transliterated versions of Elohai Nishama on a screen behind him), and even cracked a few Jewish jokes.

The theme of this year’s festival was “Compassion: Shining like the sun,” which festival Chair Owsley Brown III highlighted in some of his remarks.

“We’re going to do the best that we can do to really get into what does the word mean and how can we make this word meaningful,” Brown said.

He invoked Thomas Merton, whom he described as “our north star,” referring to the Catholic priest’s 1958 Louisville epiphany in which he said all the people he saw on a crowded downtown street were “shining like the sun; everyone was connected.”

Indeed, the conference sessions touched upon many subjects through which compassion can be manifested, including city management, economics, world affairs, the arts and social action.

• Everything is a manifestation of the one (God, adonai, allah, etc.).

• Human beings have an innate capacity to realize this one.

• Being part of this divine reality carries an ethical tradition of justice and compassion.

• This realization is the highest calling one can attain.

He acknowledged, though, that the major faiths have different “emphases” as they strive for the same realization.

“Until the Vietnam War … Buddhism wasn’t really about social action,” Shapiro said. “The Buddhism I studied was mostly about monastic life, and Judaism is nothing without being involved with justice and social action.”

Even though he has studied Buddhism and Hinduism (he was initiated into the Ramakrishna Order in 2011), Shapiro is not trying to blur the lines between religions.

“I’m not trying to put together some kind spiritual Esperanto where you pick from one or two and make your own religion,” he said. “But I’m saying that, rooted in the perennial wisdom, you can learn the ways different religions articulate it, then deepen your understanding of that one that we’re all part of. Well, Judaism talks about it one way, Hinduism might talk about it another way, but the mystics, I think, all say the same thing. The Jewish mystics say ain od, there is nothing else.”

Shapiro, who grew up in a modern Orthodox home in Springfield, MA, became enamored with Zen Buddhism as a young man. Even so, he always knew – innately, at least – which faith tradition he would follow.

“I took a break from Judaism and went seriously into the practice of Zen Buddhism and did that for 10 years with several roshis (Zen Buddhist spiritual leaders),” he said, “but Sasaki Roshi was my primary Zen master.”

Shapiro recalled how Sasaki once cornered him at Zen retreat, about the time he was graduating from college, and told him it was time for him to go to a Zen monastery.

“I didn’t want to do that,” Shapiro recalled, “and I just blurted out, ‘Can’t do that, roshi, I’m going to become a rabbi.’ And that was not in the cards; that was not what I was planning at all.”

But that’s what he did. He was ordained at the Hebrew Union College-Jewish Institute of Religion, served as an Air Force chaplain at Wright-Patterson AFB and went on to found his own synagogue in Miami.

During his career, he has reached out to Jewish scholars of all streams: Kaplan, the founder of Reconstructionist Judaism, Schachter-Shalomi and Waskow, giants in Jewish Renewal; Wine, the founder of Humanistic Judaism, and Green, one of the leading Conservative rabbis of his day.

“I was looking for some deep wisdom and I went after teachers, not denominations,” Shapiro said

“These were brilliant people who didn’t agree, but I wasn’t looking for a cogent Judaism, I was looking for wisdom that was articulated through the language of Judaism.”

The J Early Learning Center celebrated Passover on April 10. The classrooms were each dedicated to parts of the Passover story. Pharaoh knocked down building blocks. The children played leap frog, which represented the plague of frogs. The Royal Chef …

Summer camp is right around the corner. With only 5 weeks until the start, Camp J is hard at work planning and preparing for the best summer yet. Summer Camp is a special time for children of all ages to …

Recently, there has been an increase in anti-Semitic incidents reported nationally, according to the ADL and the Southern Poverty Law Center, and it is manifesting itself in many different ways. We have seen increases in Swastika graffiti, online harassment, and …