(Editor’s note: This is the second blog entry by Louisville teachers Fred Whittaker and Ron Skillern as they tour Holocaust sites with a group of students and instructors from Classrooms Without Borders (CWB). This post covers days three and four of the seminar, when the group visited Treblinka and Majdanek death camps respectively, and includes an interview with one CWB student who sang during a memorial service at Treblinka.) 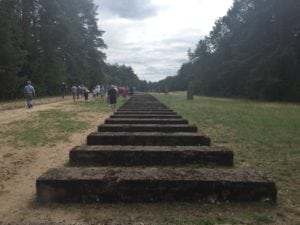 The entrance to Treblinka is marked by an artistic installation resembling a rail spur.

Day 3, Treblinka
The Treblinka extermination camp today looks pastoral, even beautiful. The Nazis totally dismantled the camp before the Soviet Red Army overran it, in a vain attempt to erase any evidence of its existence.
Today, Treblinka is a monument to the 700,000-900,000 people who were gassed to death there, many within an hour of arrival. A graveyard of stones, each bearing the name of a town or village from which the victims came is there, and Israeli flags are every where. An artistic installation memorializes rail spur that brought the victims to their final destination.
CWB held a memorial service at Treblinka. Below is a two-part video of our interview with a West Virginia high school student who participated:

Day 4, Majdanek
Located outside Lublin, Majdanek is rare among Nazi concentration camps in that the Red Army captured it intact. Experts say it would take little time to put it back in operation. The camp, with its barracks, barbed wire, gas chamber and crematoria, is within sight of Lublin and is surrounded by farm fields. A colossal monument from the Soviet era and dome urn housing the ashes of victims can be found there. 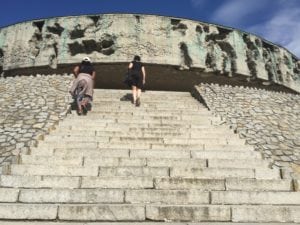 The dome urn (above) contains the ashes of thousands of victims. It is a massive structure upon which are inscribed symbols that almost appear to be letters. Upon closer inspection, though, they aren’t. It is as if they are struggling to say something, struggling to explain how something such as the Holocaust could yet be, and must still fall short.
At the entrance to Majdanek, visitors must walk through the valley surrounded on either side by massive jagged boulders. They then climb up steps. Above them is the tremendous, unbearable weight of a stone sculpture. It is the burden of the Holocaust upon which rests upon all of our shoulders, says the artist statement.
Other scenes from Majdanek: 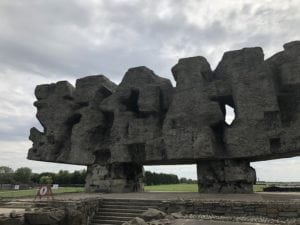 The entrance to Majdanek 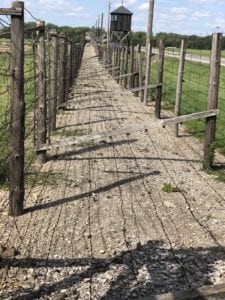 Barb wire perimeter of the camp 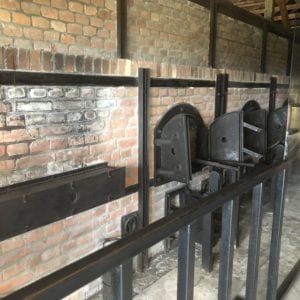 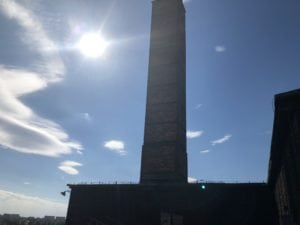 The smokestack at the crematoria