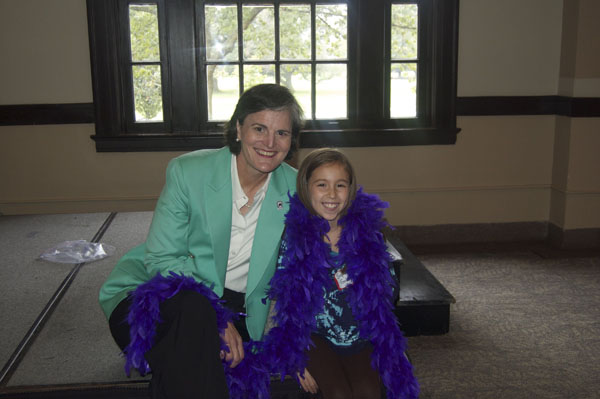 Tori Murden McClure is, by all accounts, a great American hero, not to mention a “Super Woman,” and a Renaissance person. Clearly, she has seen it all, done it all, and written the book about it (A Pearl in the Storm, 2009). She is a gifted athlete, leader, author and speaker who wants to share it all. McClure was featured as the guest speaker at the Opening Meeting of National Council of Jewish Women, Louisville Section, on Wednesday, September 21, at The Olmstead.

McClure left the NCJW crowd breathless as she described her passions as a world adventurer and humanitarian. She is probably best known as the first woman and first American to row solo across the Atlantic Ocean – twice. Why did she do it? Certainly it was more than an exercise to escape the mapping of the urban wilderness; rather, it was a “calling” to help her deal with her own sense of personal helplessness in her life.


She set out alone in her boat ultimately to prove that life, for her, was a comedy, a history, and a tragedy – all the elements of a good story except “romance” – and she vowed to write that story. Along the way, McClure learned to deal with her helplessness and in so doing deemed that it is naturally a part of the human condition. As she made peace with herself, McClure became one with the forces of nature.

The surprising finding for her, however, was realizing that there was something missing from the experience – the romance. She longed for the love that would make her humanity complete. Her journey across the Atlantic became, in the end, a journey of the heart. “Love,” she determined, “gives us our humanity and makes strong women bearable.”

McClure believes in serving causes and people in diverse ways, noting that in her journeys, she has often been transformed by “magical people who will pick you up and move you on to seek greatness.” She likened herself to the strong women of NCJW, who, in their 100-plus years of history, have served others—to educate, to advocate, to heal, to integrate, to create and to participate.

McClure is president of Spalding University. She is articulate and passionate about the transformative power of education and inspires individuals to seek greatness through learning, and to use their talents and skills to contribute to their communities. Her own academic vigor, mental determination, physical endurance and psychological stamina served to energize the guests of NCJW. It was an inspirational afternoon for all in attendance.