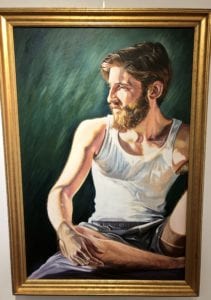 Two oil paintings and an acrylic portrait took top honors at this year’s Mazin Juried Art Exhibition at The J Patio Gallery.
First place and a $1,000 prize went to Elizabeth Bizianes for her oil-on-canvas work, “Morning II,” Ronald Anderson took second place ($500) for his acrylic work “Derby Dreams,” and Shawn Marshall took third place ($300) for “Dreamers,” an impressionist-style landscape.
Bizianes said Morning II is a portrait of her 24-year-old son, Alex.
“I have actually painted him several times, from the time he was small until now,” she said. “That was the most recent time. I guess it’s the danger of having an artist for a mother.”
She said the painting, the second of two (hence the title), employs light streaming in from a nearby window.
“That was the real interest for me,” she said, “and the shadows the window creates on him.”
A private art teacher with her own studio on Bardstown Road, Bizianes said she dabbles in all forms of media, enabling her to better help her students work with them.
But she prefers painting–oil, acrylic and watercolor.
“I like to be adventurous, but it usually comes down to portraitures because that is what I find interesting. The human face never gets boring to me.”
She studied art at the University of Louisville and went to work as a graphic designer before stopping to stay at home with her kids.
“When I came back to work, I decided to be a painter instead.”
A painter now for 25 years, Bizianes has been exhibited around town, including three to four times at the Mazin.
“The first time I was in the Mazin, Julius Friedman was the judge,” she said. “That was special; I always idolized him.”
Friedman was a graphic designer and artist who produced posters for the Kentucky Center for the Arts, the Louisville Ballet and other organizations. “He was excellent; he had a real eye,” she said, “so it was awesome to be chosen by him to be in the show.” 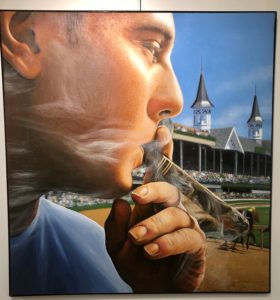 As an added treat for Bizianes, she was exhibited at this year’s Mazin with one of her students: Howard Klein.
“It was his second show ever, so he was very pleased, and rightfully so, to be chosen,” she said. “Since it is a juried exhibition, it is an honor just to be chosen. You have already won something just by being in it.”
Anderson took second place for “Derby Dreams,”
A life size acrylic portrait of his son, Ian, smoking a cigar at Churchill Downs on Derby Day.
“My son and I enjoy going to the Derby every year, going to the infield,” Anderson said, “and the portrait is my son smoking a cigar (near the paddocks). That’s just a time I cherish; it means a lot to me.”
At 34 by 36 inches, the canvas is the largest portrait he’s done.
“I’ve always liked a challenge; everything I do is because it challenges me.”
A nurse by profession, Anderson describes himself as an amateur artist who has been painting most of his life. He works in the acrylic and oil media.
“They both have their advantages,” he said. “For a larger canvas, I generally do acrylic. For smaller canvases, I generally work in oil.”
“I do it for fun,” he said.
It’s the not the first time he’s entered the Mazin.
“The only time I’ve really shown my work is at the Patio Gallery of the Jewish Community Center. I’ve belonged to the Jewish Community Center since the 1980s.” 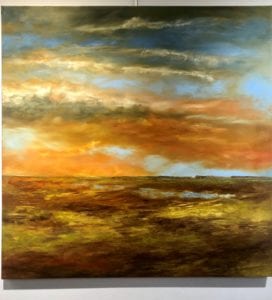 Marshall won third place for her oil-on-canvas painting Dreamers, an expansive landscape painting that speaks to the hopes of immigrant families trying to cross the border from Mexico.
“I tried to imagine what they might have imagined it would be like to cross into America and live the American dream, looking at the American horizon in front of them,” Marshall said. “But instead, they are being detained in horrible conditions in camps.”
A self-described “third-culture kid,” who grew up overseas,” Marshall said she knows what it’s like to be a stranger in a strange land.
“My family moved many times,” she said. “Along with Cyprus and Germany, I also lived in Beirut, Lebanon in the midst of the civil war in the ’70s. I saw violence and lived in fear.
“The one thing that appeared to remain peaceful was the distant landscape, specifically the horizon. In dreams, the distant horizon represents hope and an inspiration of a better future.”
A visual arts teacher at North Oldham High School, Marshall paints with oil on canvas as her primary medium. She trained as an architect at the University of Kentucky and Cornell University, where she also minored in fine arts. She started her art career in sculpture and is a member of ENID; Generations of Women Sculptors.
She is a self-taught painter whose works has been exhibited in Louisville, Lexington, Chicago and Ft. Worth, Texas, and numerous private and in corporate collections.
Honorable Mention went to Colleen Reasor for her 3D artwork “Quiet Zone.”
The Mazin exhibition is funded in part by the family of Bernice Mazin – its founder and a prolific artist throughout her life. The family includes Dennis and Judy Hummel, Arnold and Marilyn Miller. This year’s exhibit drew 53 entries. The exhibit runs through Dec. 26.