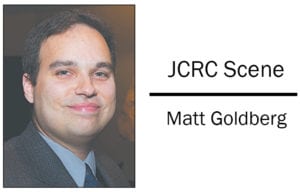 Whenever we take a public stand on a particular issue, we look at our guiding principles. What does Jewish tradition say? Have we talked about the issue previously? Is there a consensus in the community on this issue? What do our national Jewish advocacy organizations have to say? Should we take a stand one way or the other on this issue at all?
We at the Jewish Community Relations Council have a process for releasing our public statements; we ask all these questions and carefully consider what we publish. Some issues are obviously easier than others, but we are always carefully considering what we say.
I bring this up because the November midterm elections are getting close, so political campaigns are heating up. That means we are being bombarded with candidates’ stances on a whole host of issues, many of which we at the JCRC have addressed.
While neither party has a monopoly on where we stand – and we do not, in any way, shape of form, endorse candidates – it feels like our choices in the elections are becoming ever starker. Now, more than ever, candidates opposing each other rarely agree on anything, making it easier, I believe, to make a choice. Finding out where candidates and political parties stand on issues is easier than ever.
All the issues that we care about communally will be affected by this next election. Our two political parties differ (for better or worse) on Israel-related issues such as moving the U.S. embassy to Jerusalem. They differ on gun control, environmental issues, economic prosperity and values.
Our choices now make all the difference in the direction this country will take. If you care about the issues that inform your values, then you need to come out and vote on November 6.

Not 75 years after the Holocaust wiped out entire Jewish communities, there is a wonderful renaissance of Jewish life in Eastern Europe.
Poland, Lithuania and the Czech Republic, the hubs of Jewish learning and life for hundreds of years, are seeing Jewish life restored. There is a new JCC in Krakow. A new Torah scroll was just dedicated for a liberal synagogue in Prague for the first time since the Holocaust. Budapest, our Partnership2Gether city, has almost 100,000 Jews and most of them are young. Quite a change from their parents and grandparents, whose Jewish expressions was suppressed under communist rule.
Obviously, the Jewish populations in these countries will never again reach the numbers of pre-World War II (at least, not in our lifetimes) and the Yiddish/Jewish culture of these places is all but gone. Still, we should be heartened by the rebirth and resurgence of these communities.
The Joint Distribution Committee, an organization that has been around for over 100 years, supports Jewish life in Eastern Europe through direct service to impoverished Jews, summer camps for young people, and re-establishing the institutions of Jewish life.

The Hunger Walk took place Sunday, September 23, with strong Jewish support.
The annual two-mile trek around Waterfront Park that supports Dare to Care, the largest food bank in the area included a proud contingent from the community. It was good to see that Jewish-affiliated teams were the top two fundraisers. (Keneseth Israel raised over $1,000 and Jewish Louisville Team raised over $800).
This walk is an important part of Jewish Louisville history. Rabbi Dr. Herbert Waller co-founded it 40 years ago, shocked that an 11-year-old boy on the city’s West End had died from starvation.
Today, one in six people in our area are food insecure. As Jews, we must, and do, respond to this critical problem.