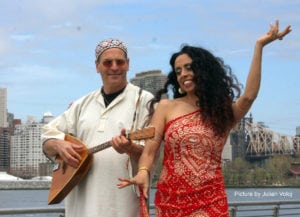 Temple Shalom’s Jewish World Music for the Soul event promises an afternoon of food trucks and family games topped by lively music from a new wave group on Sunday, September 11.

The renown Shlomit & RebbeSoul, pioneers of the new wave of Jewish World Music, will perform with Brazilian percussionist Cassio Duarte at 6 p.m. They will present an East meets West experience of infectious grooves and sounds of the Yemenite, Jewish world mixed with a California twist.

The fun and picnicking will begin at 4 p.m. when food trucks open behind Temple Shalom and games such as corn-hole, skee-ball, horseshoes and others are available.

The event will be held rain or shine at Temple Shalom.

The performers have strong ties to both Israel and the United States.

Vocalist Shlomit Levi, who was born in Israel but recently moved to the U.S., teams with guitarist and recording artist/producer RebbeSoul (Bruce Burger). Originally from California, he recently emigrated to Israel.

The duo, which represents a blending of cultures, already has sold out shows in New York City, Israel, Mexico and the UK with their modern version of Jewish Roots and World music.

Their songs are in Hebrew, English, Arabic and Aramaic. Their instruments come from various countries including the balalaika from Russia, finger cymbals from the Middle East and even an oil can from Yemen.

RebbeSoul’s accolades include a CNN International feature, appearing on the cover of Billboard magazine and achieving No. 1 on the CMJ world music charts. In addition, Shlomit is a highly respected singer in Israel.

This event is sponsored in part by generous grants from the Jewish Heritage Fund for Excellence, the Sara and Adolph van der Walde Fund of the Roth Family Foundation Inc., Temple Shalom Endowment Fund, Temple Shalom Men’s Club, Women of Temple Shalom, as well as other generous sponsors.

All local congregations will be marking Selichot, the official start to the High Holy Day season with programs and services late on Saturday night, September 24 or early Sunday morning, September 25. Traditionally, this is the first time the special …

JHFE  welcomes new Board Chair, officers and four appointments to the Board of Trustees The Jewish Heritage Fund for Excellence, a grantmaking organization working to improve community-wide health and foster a vibrant Jewish community, has announced the election of new …

Lauren Kolaczkowski graduated from the University of Louisville in 2016 where she was active with Louisville Hillel. In May, she traveled as a participant on Birthright Israel and then stayed to make aliyah. She recently worked with Nefesh B’Nefesh to become …