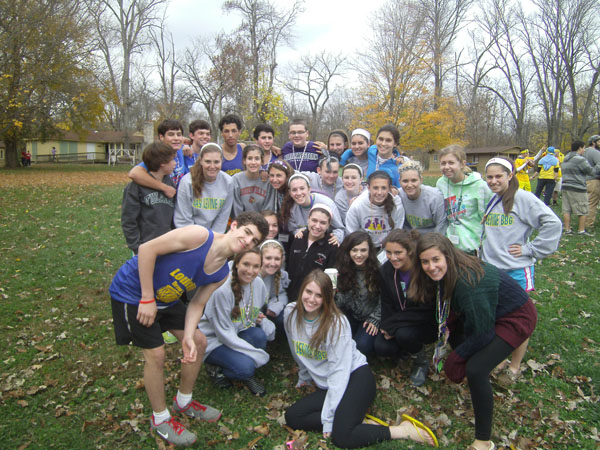 “Spirit Convention had always offered a fantastic opportunity for chapters to come together and strive to be the best they can be. This year’s Convention was no exception,” said Natania Lipp, a member of Louisville’s Jay Levine Chapter. “Twenty-seven girls from my chapter attended the convention and gained a greater appreciation of each other along the way.”

“While we may have been competing with our friends, we also were able to see everyone’s strengths, and we were able to acknowledge the accomplishments of others in the region as well,” she explained. “It’s great getting together with friends from all over and watching the leadership qualities and potential of everyone shine and grow throughout the weekend!”

The weekend after Spirit Convention, the boys of Drew Corson AZA went zip lining at the Mega Cavern in Louisville and then had a sleepover at Ben Koby’s House.

The girls of BBG recently celebrated BBG Shabbat at Rachel Bass’s house with the theme, “to the tune of BBG,” which allowed the girls to incorporate music into every aspect of their Shabbat celebration. They had a mixer where girls were given a title of a song and then were blindfolded. The girls then had to find the other girl who was singing the same song. The girls wrote songs about their chapter and the BBG movement as a whole.

Drew Corson AZA and Jay Levine BBG concluded the month by traveling to Columbus, OH, for Heart of Ohio’s Toga Party. A good time was had by all.

Next month, Jay Levine has scheduled a few upcoming chapter meetings, as well as a six-folds sleepover.

Along with Drew Corson AZA, Jay Levine will be hosting a family cookoff fundraiser for Chanukah on Sunday, December 9, for which each member and their parent(s) will bring one home-cooked dish, and in order to try each dish, you must pay fifty cents. The profits will go towards reaching our ISF (International Service Fund) goal, as well as scholarship money for regional and international events.

Next up for regional BBYO is the KIO Regional Convention in Cincinnati, December 21-24, during which the new 2013 Regional Board will be elected. Hundreds of Jewish teens are expected to attend. While teens will be electing new Regional boards, quality programming and fun social events will also be taking place so that everyone can have a great time.

To learn more about the upcoming Regional Convention and BBYO in general, please contact Louisville’s City Director, Mike Steklof at msteklof@jewishlouisville.org or 238-2774.

BBYO is open to those who are currently in 8th-12th grade. The KIO BBYO regional office is managed by The Mayerson Foundation.

Next up: Teen Connection Chanukah celebration on December 8 at the JCC.

by Shiela Steinman Wallace Shmully Litvin loves Louisville. He grew up here and attended Eliahu Academy until the sixth grade. Although he left the city to continue his education in Jewish schools elsewhere, as an adult, he chose to return …

[by Stew Bromberg] Vice President and CDO Jewish Community of Louisville I have been thinking a lot about l’dor vador– from generation to generation – this week. Actually, it all started three weeks ago on November 5. That was the …