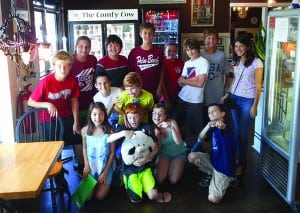 Jay Levine BBG is back in action once again. The term began on August 11 with the election of the Fall Term 2014 Board, a group of six girls who work to plan programs and better the chapter in every way that they can.

The first event was a girls only kickoff where members made cupcakes decorated to represent what they did over the summer.

At the beginning of September there was a chapter meeting at the JCC to discuss Stand Up! and Spirit Committees.

Stand Up! is the BBYO initiative where each chapter choose a cause as a to support through service, advocacy, and philanthropy. Jay Levine BBG’s cause for this term is kids with disabilities and a specific organization that the chapter can work with will be chosen soon.

Members also formed Spirit Committee groups to help the chapter prepare for Spirit Convention. These committees will work on a song, spirit wear and video to represent the chapter at KIO’s annual Spirit Convention where chapters from Kentucky, Indiana and Ohio compete for the spirit stick in all sorts of fun and games!

The chapter’s most recent event was a co-ed kickoff with its brother chapter where everyone played messy and games, sang around a bonfire, and caught up after a great summer. 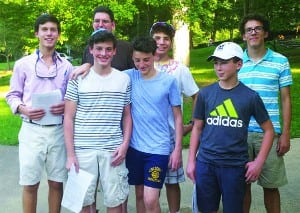 Drew Corson also held its first basketball practice of the year in preparation for the Kentucky-Indiana-Ohio (KIO) regional basketball tournament.

Drew Corson also had its Louisville BBYO kickoff event on September 13 with Jay Levine BBG. There was a messy program to start the event at Bradley Schwartz’ house that included paint twister, a jello pool and a lot of shaving cream. Afterwards, everyone went to Audrey Nussbaum’s house and ate dinner; which was pizza with side salads. After dinner, BBYO had a bonfire and made s’mores for dessert. 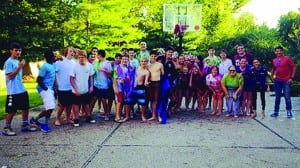 On Sunday September 7, 28 middle schoolers gathered at the JCC for a Limo Scavenger Hunt. Participants raced around in Limos as they followed clues that sent them around Louisville. Participants had to find a wax sculpture of Colonel Sanders, the cheapest gas in Jefferson County, and a place where they could see their reflection to name a few clues.

In the end, one team was victorious and won Target Gift Cards.

On Sunday, August 24, Congregation Adath Jeshurun celebrated the completion of its renovation and revitalization process. But a day earlier, it paused to celebrate the memory of loved ones lost to war. On Saturday, August 23, a plaque in memory …

On August 28, Keneseth Israel Congregation hosted the Fifth Annual “My Recipe for Peace” dinner, a yearly fundraiser for Interfaith Paths to Peace. This dinner features short speeches by local community leaders who talk about what peacemaking means to them. …