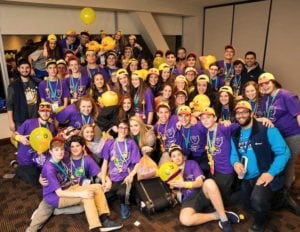 The Kentucky, Indiana, Ohio Regional delegation to the BBYO International Convention in Dallas poses for a group shot.

Chapter N’siah Abigail Geller said she was thrilled to receive the award, which recognizes excellence in all areas of chapter operations, including membership growth, programming and participation in International initiatives.

Twenty Louisville BBYO teens joined nearly 4,800 Jewish others, as well as professionals, and philanthropists for the February 16 convention. The attendees came from 48 states, districts, and provinces, and 30 countries, making for the largest gathering of Jewish teen leaders worldwide, according to BBYO.

With their 8-foot-tall inflatable rubber duck mascot, the members of the Kentucky Indiana Ohio delegation couldn’t be missed at opening ceremonies.

Throughout the four-day seminar, teens heard influential speakers and engaged in community service projects, social issues programming, concerts and even some Dallas sightseeing.

“As we highlight BBYO’s core principles of community service, civic engagement, philanthropy, leadership and Jewish heritage, our program will focus on the opportunities we have as citizens to shape the world,” said Matthew Grossman, chief executive officer of BBYO. “Each of our guest speakers has made a positive impact in effecting change, and each has inspirational stories to share.”

The convention culminated in a concert by Fifth Harmony and Nelly.

The next international convention will be held in 2018 in Orlando, Florida. Registration opens in October.

(Kari Semel is teen director of the Jewish Community of Louisville and assistant director of The J Summer Camp.)

A movie that proves it is never too late to date, The Age of Love, will be shown at The J Patio Gallery on Thursday, March 30 at 1 p.m. The showing is free for everyone as part of the …

If the idea behind the March 8 bomb threat at The J was to scare people away from the center, it didn’t work. In fact, an estimated 500-plus people converged upon the front steps of The J Sunday, March 12, …

The effort to envision the services and programs Jewish Louisville will need in the 21st century – and the facilities needed to provide them – is turning to the community for help. The JTomorrow! Steering Committee, which has been working …