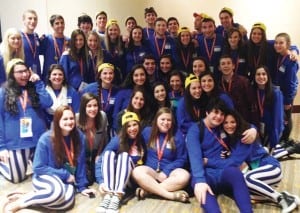 This year’s BBYO International Convention was held in Dallas, TX, and had over 2500 teens in attendance. Twelve of those teens were from Louisville and 52 were from the Kentucky Indiana Ohio Region. This year was the largest IC to date and is proof that BBYO really is a welcoming home for every Jewish teen, anywhere.

Opening ceremonies featured a welcome video from the Prime Minister of the State of Israel, Benjamin Netanyahu. He told IC participants that BBYO “encourages young Jews of all backgrounds to be proud of their heritage. … You bring to Israel more teens than any other North American Jewish organization. In doing this, you’re helping to create a human bridge to connect the young generation of American Jews with the young generation of Israeli Jews.”

On Friday, we experienced BBYO Stand UP Day and welcomed BBYO alumni and community leaders engaged in Jewish communal service, educational and entrepreneurial work around the world.

We heard powerful remarks from CEO of Change.org, Ben Rattray; U.S. Olympic four-time gold medalist and ambassador for the American Heart Association, Dana Vollmer; and humanitarian, Alina Spaulding. They inspired us to address the problems in our communities and change the world.

We were also privileged to present the annual BBYO Stand UP Lifetime Achievement Award to Natan Sharansky, chairman of the Executive of the Jewish Agency for Israel, who accepted via video. “If you really want to change the world,” he said, “you must be connected to the roots of your people. … Mazel tov on 90 years of tikkun olam. … I hope we will continue our struggle together for the better future of the State of Israel, the Jewish people, and our world.”

We learned that 80 percent of cardiac arrests occur outside of a hospital, and that it’s important to know CPR should one confront life-threatening situations like these. We finished the day by filming a PSA with Dana Vollmer and members of MTV’s “The Buried Life,” to encourage others to learn CPR.

Also, at IC we experienced a meaningful Shabbat with 24 worship options. We also had a day of learning, International Board elections, AZAA and BBGG athletics tournaments, an awards gala, a concert by American Authors, B.o.B and 3LAU, networking with friends and the list goes on.

IC was a life-changing experience for all who attended.

Drew Corson AZA #2329, attended family services at The Temple on Friday, January 24. During this service, the 5th grade class led us in prayer. In the middle of the service, the 5th grade class gave a brief lecture about the Aleph Bet, which ended with the “Aleph-Bet Song.” Bradley Schwartz and David Hemmer led the congregation by assisting Rabbi Gaylia Rooks in opening the ark. The service was then concluded with desert as the 5th graders celebrated their success.

This second annual Community Shabbat Dinner at the JCC was a huge success again this year, with more than 140 people in attendance – up from 100 last year. This year’s event, which was hosted by Tracy and Mark Geller, …

A new, tan face is taking the helm as senior director of camp and youth services at the Jewish Community Center. Betsy Schwartz landed in snowy Louisville fresh from Sarasota, FL, where she’s been the director of major programs for …

I spent this past semester studying abroad in Gaborone, Botswana, one country above South Africa. I was there for a total of five months taking classes at the university, living with a host family and observing at various clinics. I …