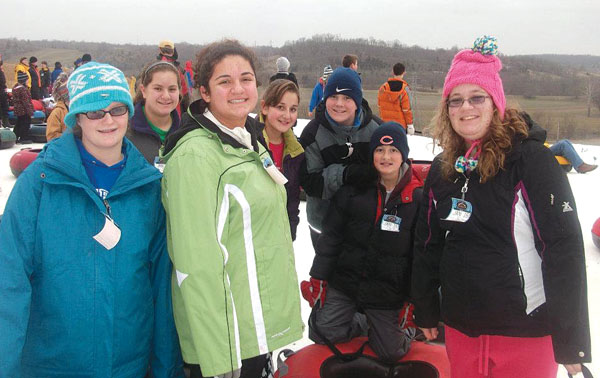 It was the first time on the slopes for a few of the Teen Connection participants but some of the veterans made their way down with ease. The tubing hill was a popular spot for most, and the lifts were constantly running for the boarders and skiers.

The next Teen Connection event, Monday, February 13, will be dinner and a movie at Tinseltown. For more information, contact David Siskin at 238-2701.

The theme for this year’s convention was Fear Factor. Some activities that involved the theme were creating skits revolving around facing your fears, a food-eating contest and a meditation service. There also was a karaoke session and a fun bowling event. We also had the surprise musical guests, The Maccabeats, who sang one of their original songs, “Candlelight.”

The 57th regional board gave their office reports for the region. We elected the 58th regional executive board, which includes two Louisville girls: Sophie Reskin for Membership Vice President and Alanna Gilbert for Secretary.

Jacob Frankovitz from Indianapolis and Rachel Klein from Louisville coordinated this awesome convention.

USY’s annual International Convention is like no other experience I have ever had. It an experience beyond words. USYers throughout the continent gather for five amazing, crazy, ruach- (spirit) charged days in a different city each year to catch up with old friends from Ramah summer camps and USY summer programs, as well as to make new friends.

Everybody from the international director, to the staff, to the freshman who has never been to IC before, are all having the time of their lives, singing, dancing, cheering, or just hanging out. Nobody leaves convention without having had an incredible experience.

IC is the sound of a thousand Jewish high schoolers singing to the Maccabeats. It is the rush of energy from jumping up and down on a chair and cheering when your region is mentioned in a speech. It is the love and friendship shared by generations of USYers. It is lighting the menorah and celebrating Chanukah with your closest friends.

This particular convention featured a performance by the Jewish a cappella group Six13, social action projects, leadership workshops, the breaking of the world record for the most dreidels spinning at the same time and a game of International Treasure, in addition to the annual election of the 2012 international officers, an unbelievable opening session and dance.

I highly encourage Jewish high school students to attend USY conventions on both the regional and international level. I talk to the friends I made at IC weekly and couldn’t imagine my life without my USY friends.

Going to IC gave me a new sense of what Judaism could really be. IC showed me that there are Jews like me who are passionate about USY and excited about being Jewish. IC 2011 in Philadelphia was my third IC. I started counting down the time until IC as soon as I got home from the previous year’s convention. It is truly the Jewish experience of a lifetime.

Who’s Saly? Saly is a donor to the 2012 Federation Campaign. She has been steadfastly giving for many years, helping the Jewish Community of Louisville provide the funding to help many agencies and programs in Louisville, Israel and around the …

Keneseth Israel invites the community to kick off Super Bowl Sunday with a participatory, energetic concert for all ages, by Sababa, Jewish music’s coolest folk rock trio, on Sunday, February 5, at 11 a.m. “I can’t wait to bring our …

Dear Valued Members, Two weeks ago, the Jewish Community Center closed the indoor pool and spa areas to add chair lifts for handicapped access as mandated by the Americans with Disabilities Act. The renovation is now complete and both whirlpools …