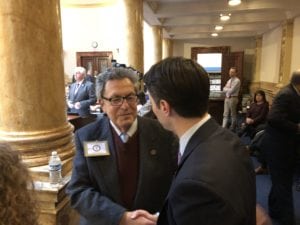 Fred Gross shakes hands with state Sen. Morgan McGarvey on March 21 shortly before the Kentucky Senate passed the Ann Klein and Fred Gross Holocaust Education Act. Now an effort is underway to influence how the subject is taught in public schools. (Community photo by Lee Chottiner)

With mandatory Holocaust and genocide education about to become law in Kentucky, a group of teachers and Jewish leaders are organizing to influence the way the subject is taught.
This committee has drafted a rationale statement for the project, which must be approved by the Kentucky Department of Education (KDE).
They also plan to work on recommendations for pedagogy – the method and practice used for teaching the subject. A number of curricula, including those developed by the U.S. Holocaust Memorial Museum and Yad Vashem, have already been OK’d for use by the KDE.
“The curriculum is the what; the pedagogy is the how, and the rationale statement is the why,” Goldberg said.
The participants held a conference call this week to discuss how best to proceed, but Goldberg stressed that the process is still in its early stages.
The KDE already has a web-based “portal,” a collection of resources, in place through which middle and high school teachers can access help with their Holocaust instruction. Goldberg said the committee’s intent is merely to refine that portal.
“We’re not reinventing the wheel here; there are already wonderful curricula out there,” he said. “What we want is for teachers around the state to have access to high-quality guidelines for teaching the Holocaust.”
The Kentucky Legislature, in its regular session this year, passed the Ann Klein and Fred Gross Holocaust Education Act, making Holocaust and genocide education mandatory in public middle schools and high schools. Governor Matt Bevin signed the act, which takes effect next year.
The legislation’s passage capped a 15-year lobbying effort, primarily by Fred Whittaker and his students and parents from St. Francis of Assisi Catholic School in Louisville.
The new law also enshrines a benchmark for what qualifies as a genocide: The United Nations Convention on the Prevention and Punishment of the Crime of Genocide.
Lauren Gallicchio, social studies academic program consultant for the KDE, is working with the committee.
Kentucky will become one of a handful of states to require Holocaust education in its schools.
Whittaker, who just returned from Poland, where he took part in the Classrooms Without Borders seminar that exposes teachers to the actual sites of the Shoah, said he hopes the committee will serve to “enrich” the KDE’s portal. He wants Holocaust instruction in Kentucky to be more than a dry recitation of the facts to a classroom full of students.
“The teachers should be called to be more than historians when they’re in the classroom with the Holocaust,” he said.

The righteous shall flourish like a palm tree and grow mighty like a cedar in Lebanon. — Psalm 92 The cedars of Lebanon are dying, and climate change is to blame. Psalm 92, which appears in most Shabbat siddurim, contains …