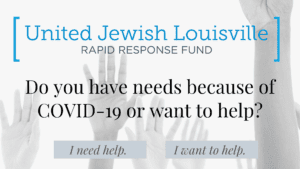 For the second time in as many years, the Jewish Federation of Louisville is running at least two campaigns at the same time – out of necessity.
In addition to the Annual Campaign, which supports the regular operations of the Jewish Community Louisville and other agencies, the JCL has set up the United Jewish Louisville Rapid Response Fund, an emergency response to  the coronavirus pandemic and the toll it is extracting from the community.
On Sunday, JCL sent out a plea to leaders of agencies and synagogues asking for their assistance. It sent out a separate mailer to individual Federation donors.
“This collective effort will provide support to families and individuals and those on the front line serving our Jewish community,” said Jon Fleischaker, chair of the JCL Board of Directors,
The tandem campaigns are a response to unimaginable circumstances no one in Jewish Louisville has seen in their lifetime.
“It is vital that the families and individuals who are struggling from the impact of COVID-19 have a place to ask for and receive help,” said Sara Klein Wagner, CEO and president. “We anticipate the needs will continue to evolve over time, therefore we will focus on immediate and long term.”
Ralph Green, task force co-chair, said,
“We knew when all this started to intensify that our community was going to need some emergency relief,”
The Rapid Response Fund has already allocated Phase I grants for a total of over $85,000 across the community from a $400,000 seed grant provided by the Jewish Heritage Fund for Excellence (JHFE). The community will be called upon to support this effort in anticipation of needs outweighing seed funding.
The Community Grants Task Force, made the first round of allocations on Sunday. “We felt a sense of urgency to make some allocations to the best of our ability,” Green said of the allocations, which were based on a grant application provided to the agencies and synagogues.
The task force will continue to evaluate needs based on incoming funding requests and continue to prioritize all needs. The task force has settled on three messages to the community:

“The beauty of this [time], amid so much tragedy, is it is bringing our community together … in a thoughtful loving way,” said Stacy Gordon-Funk, Senior Vice-President and Chief Development Officer of JCL.
The nine-member task force consists of representatives from JHFE, Jewish Community of Louisville, Louisville Council of Jewish Congregations, Jewish Family & Career Services and at-large members. The representatives include Green, Fleischaker, Cheryl Small, Glenn Levine, Linda Schuster, Jane Goldstein, Larry Snyder, Matt Schwartz and Rabbi Beth Jacowitz Chottiner.
Green said that “there is a true spirit of cooperation.”
While the Rapid Response is critical now, Gordon-Funk stressed that the annual campaign will be just as critical once the crisis passes.
“The annual campaign has not come to an end,” she said. “We don’t want [supporters] to forget that their annual campaign contribution is essential when we get back to work… we’ll have to rebuild and retool.”
The main difference between the annual campaign and Rapid Response, she added, is that the Federation is asking for only for pledges to the annual campaign; Rapid Response needs financial support immediately.

Please help
To support the United Jewish Louisville Rapid Response, or to get more information, go to: Jewishlouisville.org/United-Jewish-Louisville. You can also help by volunteering. As the Federation completes its annual campaign, it is asking supporters to consider renewing their pledges. Contact Sara Klein Wagner at swagner@JewishLouisville.org for more information.