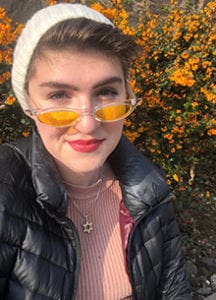 When Jordan Lynn Goldstein flew to Israel last year to begin cantorial school, they already had a wealth of experience.
A graduate of Washington & Lee University in Lexington, Virginia, Goldstein, now 23, had spent four years leading services at the local Hillel. In fact, they spent their first week on campus on the pulpit.
Their congregation swelled to 50 people at times, including students, faculty, Lexington residents and cadets from the nearby Virginia Military Institute.
Sometimes, they had to give worshippers the kind of comfort a trained rabbi or cantor provides, like following the mass shooting at the Emanuel A.M.E. Church in Charleston, South Carolina.
“I had to figure out how to respond [to a tragedy], how do I help heal my community,” they said. “One of the biggest challenges of the clergy is how do you respond to such things. Now, at 23, I already have that experience.”
They also have written their own music for the service liturgy and studied at the annual Hava Nashira song-leading and music workshop in Wisconsin.
It is a wealth of experience, and this fall, Goldstein will offer it to Temple Shalom as its new student cantor. They will be on the bima for the High Holy Days, then one weekend a month throughout the year.
“I am very excited that Jordan will be joining Temple Shalom,” said Rabbi Beth Jacowitz Chottiner. “[They] will enhance our worship experiences with her voice and enthusiasm.”
Far from the classical operatic cantor (the guitar-playing Goldstein said their style was more conducive to a coffee house than a concert hall), they also bristle at the being called a performer.
They see themselves more as a “conduit” for prayer, bringing the congregation together in music, and a “catalyst” for learning.
A native of Las Vegas, Goldstein said they decided at a young age (even younger than they are now) to be a cantor, fused by their mother’s love for James Taylor and Fleetwood Mac, and their father ‘s passion for music theater. They recall sitting by the pool, listening to tunes and cranking the radio on long car rides.
But it was Goldstein’s experience at URJ-Kutz Camp in New York, a summer incubator program for young Reform Jewish leaders, that set their sights on the cantorate.
“After my first taste of this (Kutz), I said this is what I’m going to do with the rest of my life – I figured it out,” Goldstein recalled.
For a budding cantor, Goldstein chose an odd double major at Washington & Lee: music composition and political science.
But Goldstein said their political studies influenced their music, especially in Israel while working at a synagogue in Tel Aviv. They used their political studies to learn about the worshippers, craft services and select melodies that spoke to the congregation.
“Politics and its nature is how we interact with each other and what those relationships mean, whether it’s globally or just one on one,” they said. “It doesn’t have to be this scary concept.”
Their political and musical experience are only parts of what Goldstein brings to their developing cantorate. Another big part is their identity.
Goldstein is nonbinary, not identifying as male or female, and preferring neutral pronouns such as they, their and them, to identify themselves.
Goldstein’s journey to this place was a long one. “For me, I didn’t even have the language to figure these things out until I was in college.”
There, Goldstein met others who were on the same journey and plied them with questions.
“That was a huge experience for me, to talk to [other nonbinary people] and ask why. Every time I heard an explanation it sounded like, ‘oh, that’s how I feel.’”
Goldstein is part of Hebrew Union College’s first cantorial class to accept openly nonbinary students, “which is a very cool place to be.”
Being an openly nonbinary cleric is a bit of balancing act. While they don’t want their cantorate to be all about their gender identity, Goldstein said they can help people understand and accept it.
“It’s a line,” they said. “I’m not trying to make everything I do about gender, which can be alienating.”
But being a successful cantor, they added, means “being your genuine self.”
And they are.