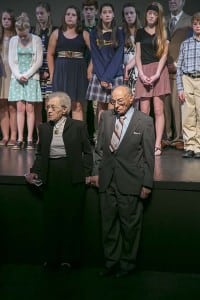 Each Holocaust survivor’s story is unique and each has found a way to live with the memories. Some have been sharing their experiences for years, hoping that by doing so they can promote tolerance and understanding.

Others, who have been silent for years, not wanting to burden others with their pain, or perhaps not wanting to revisit the pain themselves, have decided that they must share their stories now, before they are no longer able to do so.

Still others remain silent, convinced that their stories should not be shared.

This year, when the people gathered at the Kentucky Center of the Arts for the Jewish Community Relations Council’s annual community-wide Yom HaShoah Holocaust commemoration, they were immersed in a unique sharing experience.

The program, Pouring Out the Heart: Learning from personal Holocaust stories, revolved around a film made by Catholic middle school students in Fred Whittaker’s class at St. Francis of Assisi and Jewish middle schoolers who are participating in the Jewish Community Center’s Teen Connections program.

In making this film, the young teens learned how to be compassionate listeners, how to ask questions sensitively and how to create a space where Holocaust survivors felt comfortable and safe. The survivors opened up to the youngsters, sharing their stories and connecting with them.

Together, they created a permanent record that will enable generations to come to hear the first-hand testimony of survivors long after they are gone.

With bassoon and flute duets, Matt and Kathy Karr opened the program and set the tone for the evening, coming back from time to time to weave the parts together.

Rabbi Joe Rooks Rapport talked about the importance of remembering and invited the teens who made the movie to read what has become a traditional recitation recalling the different groups persecuted by the Nazis as the survivors, their descendants and Holocaust educators lit 11 candles for the 11 million murdered.

This year’s program took place just days after a racist gunman opened fire on two Jewish campuses in Kansas City, KS, claiming three lives. Rabbi Stanley Miles, saying that in every generation, there are those who may wish to destroy us, spoke of that recent tragedy and of the uncertainty facing the Jewish community in Ukraine, before introducing two Israeli soldiers, Capt. Ari Rosenstein and 2nd Lt. Shir Hoskover, who were in Louisville to participate in Yom HaShoah.

Rosenstein, the grandson of Holocaust survivors, was born in New York and made aliyah in 1997. Named for an uncle who was killed in Poland during the Holocaust, the soldier said that he was living in Israel, fulfilling his uncle’s dream as a proud Jewish Israeli.

He spoke of three circles of remembrance. The inner circle is those who experienced the Holocaust first-hand. The second circle is those who heard the testimony firsthand from the survivors and the third circle who have only heard accounts of what happened. “I represent the State of Israel,” he said, “and we all represent the third circle of remembrance.”

Israel was rebuilt out of the ashes of the Holocaust, he said, and it is here to stay. The IDF will make sure of it.

Hoshkover, a member of the IDF’s Education Corps, explained that her job is to teach values to the soldiers and train them to think and act as a humane army – with the goal of making each soldier a better person and a better citizen.

The Nazi soldiers were people with families, she said, but outside their homes, they lost all values and moral standards. Israel is committed to ensuring that each soldier recognizes the value of every person.

Picking up on the theme of education, Cantor Sharon Hordes sang the Yiddish lullaby Oifn Pripetshik as a bridge between the Israeli soldiers and the film.

With tremendous poise and understanding, some of the teens introduced their film, punctuating their brief statements with, “Nizkor. We will not forget.” – the same refrain used earlier in the program as the candles were lit.

Fred Whittaker, the Holocaust educator who brought the film project from dream to reality, brought the program to a close with words of praise for the young people, the survivors and their project, which will enable the survivors to continue to teach, pulling us into compassion and social justice.

Nizkor. We will not forget.

Mike Zeitman is one of three members of the 2014 class to be inducted into the USA Racquetball Hall of Fame on May 23 in Fullerton, CA. The other inductees are Brian Hawkes of Lake Forest, CA, and Jimmy Lowe …

Thank You, Laos! This past week, the Anti-Defamation League issued a comprehensive report on Anti-Semitic attitudes around the world – the largest ever survey of its kind. The results were sobering and depressing. The countries polled represent over four billion …