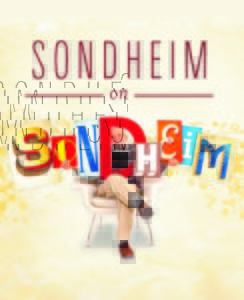 What does a legend of the theatre do near the end of a groundbreaking career? Generally, he writes a memoir or films a sentimental journey of origins and greatest hits and basks in the limelight of whatever is left of his life.

But, what if all you have left is one big musical hit (Send in the Clowns), your name is Stephen Sondheim and your nickname is “God”?

Answer: You make a musical with 38 or so of your songs, mix in bits of whimsical film and call it Sondheim on Sondheim.

It’s the production CenterStage selected as the finale of its 2016-17 season.

Stephen Joshua Sondheim cannot be summarized in two plus hours of songs and film, but one can get a sense as to why his contributions to theatre are unique and how his family life – or lack thereof – shaped his life.

Each performer had his or her moments in the sun – alone or together.

Newton was forthrightly effective in “Franklin Shepard, Inc.” from Merrily We Roll Along; Dunlap was scary as hell with “Epiphany” from Sweeney Todd. All were menacing in “The Gun Song” from Assassins; and Raque stopped the show with “Send in the Clowns” from A Little Night Music.

The point is that all these people were extremely effective in making the difficult seem effortless.

The interaction between drama, song and film was effective, particularly while Dunlap was singing “Finishing the Hat” from Sunday in the Park with George.

Sondheim may indeed be God but, if so, God has a wry sense of humor, a twinkle in his eye with one eyebrow raised to a world full of surprises.

Sondheim on Sondheim is not for everybody; most of the people in my row left at intermission. Still, it gives a perfect sense of why Sondheim’s contributions to theatre are complex and staggering. Those folks who left should have stuck around.
…
The 2017-18 season will be here in no time featuring, and the lineup has already been announced: Kiss Me Kate; Smokey Joe’s Café; Jekyll and Hyde; Driving Miss Daisy; Andrew Lippa’s Wild Party; The Little Mermaid and, in a late addition, Rocky Horror Picture Show.

The JCL is supporting LIFE & LEGACY, a program of the Harold Grinspoon Foundation that promotes after-lifetime giving to Jewish agencies and synagogues in Louisville. Through training, support and monetary incentives, LIFE & LEGACY motivates Jewish organizations to integrate legacy …

Shavuot a time to renew selves, relationship with God, rabbi says We are still journeying from Egypt toward Sinai as we make our way through the period of the Omer from Pesach to Shavuot. While it felt like we turned …