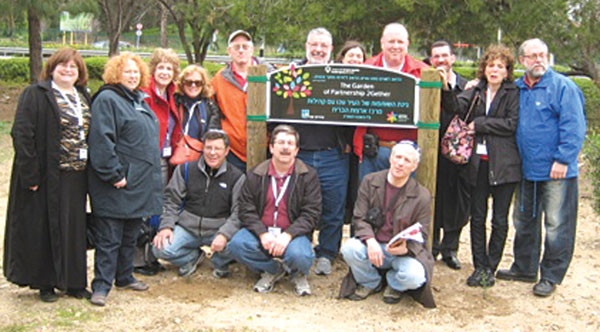 Every time a group from Louisville travels to our Partnership 2Gether region in Israel, the Western Galilee, the participants – whether they’ve been to Israel many times or have just made their first trip – come back to report on new experiences, closer connections to their Israeli friends and a strong commitment to continuing the Partnership.

For the past several years, Rabbi Stanley Miles of Temple Shalom has spearheaded a mission for clergy and synagogue leadership. At the end of February, he led a group of 14, including five other Louisvillians, on a trip that included opportunities to learn, to do hands-on tikkun olam projects, to renew and make new friendships and to explore the country. Other members of the Louisville delegation were Cantor Sharon Hordes of Keneseth Israel, Cantor David Lipp of Adath Jeshurun, and Kathy Karr, Andrea Koven and Judy Sharp, all of Temple Shalom. For the first time ever, this mission included consortium members from all streams of Judaism.

“I’ve been on a mission before,” Sharp said. “This group was very cohesive and task-oriented. With so many people from Louisville, we’re determined Louisville will do some great things for Partnership. It was a very positive experience.”

Two cantors from Toledo, OH, were also on the trip. They, Cantors Hordes and Lipp, and Karr, the principal flutist with the Louisville Orchestra, collaborated with several Israeli musicians at a benefit concert that raised $4,000 shekels (more than $1,500) for the Youth Futures program.

“In addition to the five Americans,” Cantor Lipp said, “we also performed with Oleg, a wonderful pianist; Aviad, the new education chair who played guitar and sang one of his own compositions; Eran [Elvar], who played a piece of his own with Kathy Karr; Gil, an eco-instrumentalist who played percussion on a modified oil drum and flute on some plumbing piping designed for the purpose; and finally two girls who benefit from the program itself.”

“I love doing these programs,” Karr said. “I get to meet so many different musicians and artists and rehearse in their homes and meet a lot of different people.”

Elvar is a Partnership coordinator for the Jewish Agency. To Karr’s delight, one of the musicians he brought for this project is a retired flutist from the Haifa symphony. Karr especially enjoyed it when “Eran opened his home and invited his neighbors to hear us rehearse, so his living room was filled with children and neighbors.”

Cantor Hordes and Karr also brought their music into the kindergarten classrooms in the region, working with Efrat Srebro. “We’re the only live music the children get all year long,” Karr noted.

The Youth Futures is a Jewish Agency for Israel program that helps children break the cycle of poverty through life mentoring and educational opportunities.

In the area of visual arts, the mission participants collected some large, blank fabric stars, which they brought back to Louisville for children to decorate. Other stars were sent to other Midwest Consortium communities and some stayed in Israel. When all the stars are completed, they will be sent to the Western Galilee for a “Shining Stars” exhibit that will be on permanent display. Sharp is coordinating this project in Louisville.

Ten of the mission participants went to the main food bank in Akko, Rabbi Miles reported, where they put together “800 sandwiches for children’s school lunches that day.”

Rabbi Miles was particularly moved by a visit to a Tunisian synagogue. “What if you woke up one morning and had the feeling that you were the last Jew in the world?” he asked.

“There is a group that had that feeling – part of the North African Jewish community,” he explained. “They were deported to the death camps from Tunisia by the Nazis. After the war, they knew they couldn’t go home, so they gravitated to Israel and found the Akko area to be like home.”

There, the group found other Jews and a reason to continue. In testament to their renewed Jewish life, they built a synagogue, Congregation Or Torah, “alive with magnificent mosaics” that tell their stories of triumph and tragedy. “Every time I go, I find something else I must share,” Rabbi Miles concluded.

This was Cantor Hordes’ first mission, and she had set a personal goal “to talk to a diverse group of Israelies and to get as many opinions as possible about what’s going on with the threat from Iran and regular interaction between Jews and Israelis.”

What she found was a plethora of opinions as diverse as the population.

“There were some people who said they’re not being treated fairly, and Arabs should be treated equally. Others said, ‘they’ll tell you what you want to hear, but it’s not the truth.”

Cantor Hordes observed, “People are people, and everybody should be treated with dignity and respect. I can’t believe a whole people could be called liars. And some of this was coming from my relatives.

“I wanted to get to the bottom of it,” she said. “On last day, we were talking with kids in the Youth Futures program.” The group, which included Israeli Arabs and Jews, told her, “‘We just see each other as people,’ and I was so grateful to hear that.

“I felt like my preconceptions had been challenged,” she concluded. “Peace is possible. I still don’t know what the answer is.”

“Akko is one of the few cities that is integrated,” noted Koven, “and that surprised me.” As they traveled, she found Jewish, Arab and Druze villages, “but in Israel, separation is the rule – except in Akko.”

“It doesn’t matter who you are,” Sharp added, “you’re welcome.”

The hospital, which sustained a direct hit by a Katyusha rocket during the last Lebanon war, now displays that rocket as a reminder. During the war, it also became apparent that the emergency room was inadequately sheltered. With Partnership assistance, a new emergency room has been designed and the mission participants had the opportunity to tour the new facility.

The ambulances now enter a completely shielded area where they can safely transport their patients into the facility for treatment. It is an extension of the secure underground facilities the hospital maintains for evacuation of all patients and staff to rooms that can withstand conventional as well as chemical attack.

While the hospital is prepared for the worst eventualities, Rabbi Miles observed the country as a whole seemed more relaxed, with fewer guards visible at the entrances to restaurants and shops than he had encountered in the past.

The group also visited an Ethiopian immigrant in her home in a kibbutz. She had recreated a hut from her birthland. “She invites people in and tells the story about how she got to Israel,” Koven said. “She and her family walked a year and a half from Ethiopia to Sudan before Operation Moses in the 1970’s.”

Connecting with old friends is also an important part of any mission. The Louisvillians renewed contact with Hagit Rosmarin, Dr. Norman Loberan, Alexandra, Simon and Netta Shklar and Peter and Dalia Anik.

“Kfar Vradim, literally Roses Village, is the closest viable Conservative congregation to our region and one of only two Masorti synagogues in the State of Israel to receive money for the construction of its new synagogue,” Cantor Lipp said. “The new building is now up and is simply waiting to be furnished, so we three cantors were honored to lead parts of the Shabbat services in a preschool setting while enjoying the generous hospitality of the congregation.

“One of the most meaningful moments we had,” he contined, “was sitting in a circle after the Friday evening meal at the synagogue singing zemirot, Shabbat songs, each of us teaching and leading one melody after another. Perhaps most hopeful for the long term viability of the shul and the movement in Israel in general is the fact that a majority of the attendees were not ‘Anglos’, Israeli citizens from English speaking countries.”

Temple Shalom views Emet v’Shalom as a sister congregation, so this visit reaffirmed the connection.

“Both the Israelis and the Americans benefit from our partnership,” Koven said.

Stefan Staloff’s story about his recent experiences at Israel’s Kibbutz Naan has a history that goes back to when his Danish mother, Helle Jensen Staloff, and American father, Edmond, met at the kibbutz 30 years ago. “I had heard the …