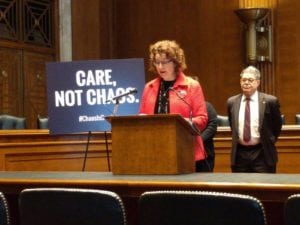 A Jewish Louisvillian who suffers from Crohn’s Disease joined a press conference Wednesday in Washington called by Senate Democrats to highlight the adverse impact of repealing the Affordable Care Act (ACA).

Amy Shir said she was diagnosed with Crohn’s when she was 22 and takes medicines that would otherwise cost her thousands of dollars per month if she didn’t have health insurance.

“This disease is also considered a pre-existing condition, which may prevent me from accessing health care in the future unless we all speak up for each other to stop repeal of the Affordable Care Act,” Shir said in her statement.

Under the ACA, health insurers may not deny coverage to people with pre-existing conditions.

“When the long-overdue Affordable Care Act was passed, my family’s health insurance premiums dropped more than a third and included much better benefits thanks to a plan we found on kynect, Kentucky’s state-based exchange,” Shir said in her statement.  “This was an enormous improvement over what we had before the Affordable Care Act, when we were basically on our own trying to find an insurance company to sell us a policy.

“Our state and federal government officials talk about helping ‘the little guy,’ the small business person and entrepreneur,” she added, “yet in reality, they’re creating an environment where only employees of large companies will have access to affordable health care, especially the large numbers of people like me with financially ruinous pre-existing conditions like Crohn’s Disease, or diabetes, cancer or heart disease.”

Concluding, she said, “I’m here today because my health – and my family’s security – are in serious jeopardy with the reckless talk of repealing the Affordable Care Act.”

Shir said she got the invitation to speak after she told her story last week during a stop by the Save My Care bus tour at the Family Health Center in the Portland neighborhood of Louisville.

“Afterwards, a woman said, ‘would you like to go to D.C. next week and  testify before a hearing on Obama Care repeal,’” she told Community.

Aside from some editing to make the statement appeal to a national audience instead of a Kentucky crowd, she said it was the same speech she delivered in Louisville.

Sens. Patty Murray (Washington), Al Franken (Minnesota) and Tim Kane (Virginia) – all members of the Senate Health Education Labor & Pensions Committee (HELP), which held hearings the same day on the ACA – were at the press conference.

Shir didn’t speak at the hearing itself, but she sat behind former Kentucky Gov. Steven Beshear, who  testified in defense of the ACA, saying repeal would create chaos in the insurance market.

“There was really a strong message there,” she said.

Shir, a self-employed consultant and the mother of two teenagers, was one of two consumers to speak at the press conference. She emphasized the importance of speaking out.

“Ninety-nine percent of this is just showing up and being willing,” she said.

Asked what Jews can do about the declining levels of affiliation these days, Uriel Heilman had an interesting answer. “Have more kids,” he told the 40-some people at a recent breakfast talk at Keneseth Israel Congregation, most of whom were …