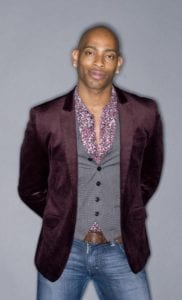 Yehuda Jai Husband is an animator and self-described “drama freak,” who decided to create a theater group to celebrate Jewish theater in Louisville.
When he approached the leadership at Adath Jeshurun, they liked the idea but were too busy to take it on. So they gave him the reins, and he ran with it. The Shema Theater Group was born.
The name, Shema, means to hear, and Husband thought it was the perfect fit.
“It just struck me as something that, you know, we want to be heard, that there’s so many, so many, stories, Jewish stories, and really getting them heard, and being a platform for Jewish stories and for even just the presence of Jewish theater,” he said.
He recalled a scene from Jest a Second!, the group’s first production: “The mother tells the son that you’re Jewish and there are people who will hate you because you are Jewish, and the anti-Semitism that’s rising in our country, in Europe, just across the world, and this is so concerning, and just, you know, being a being a voice crying out and then being heard and dealing with those subjects.”
Husband is excited to explore the different voices of Judaism.
“I was at the Alliance for Jewish Theatre conference, and there’s so many people who are looking for a venue for their work, and then also there’s so much out there, I mean, I had no idea when I first took on this project.”
Husband wanted to provide an outlet for indie Jewish plays. “I just really want to make sure that the focus is not only Judaism but showing Judaism in its diversity, really doing work by Jewish women, and just really providing a platform for Jewish theater in general.”
Jest a Second!, by James Sherman, a comedy about a gathering of the Goldman family, and the issues the children deal with, coming together for the birthday of the family matriarch, played for three shows in November.
The group’s group’s next production, A Satisfied Mind, which Husband wrote, will be performed this spring. He had been working on it for Shema, but he submitted it last summer to the Alliance for Jewish Theatre, which performed it at the Victory Gardens Theatre in Chicago.
“I’m even more excited now about bringing that piece to Shema,” he said.
Jest a Second! will feature Harrison Alexander Coffman as Joel, Rachel Vidal as Sarah, Yehuda Jai Husband as Bob, Rita Hight as Miriam, Steve Berger as Abe and William Nickles as Dr. Rosen.