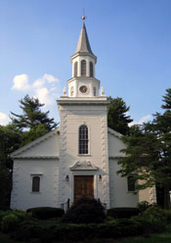 The New Synagogue in Brookville, New York, which meets in the Brookville Reformed Church, is one of many examples of space sharing between, Jews, Christians and Muslims nationwide.

When leaders of Temple Israel in Omaha met with Muslims to find a partner in relocating to another neighborhood, they brought baked goods. No surprise.
So did the Muslims. A good omen.
That meeting grew into a partnership between Jews, Muslims and Christians: a tri-faith initiative, with three houses of worship and a shared community center to promote peace and understanding among the different faiths.
Back east, on Long Island, Cutchogue Presbyterian Church and North Fork Reform Synagogue were further along in space sharing. The small Protestant congregation had just celebrated Christmas and now was storing its two-foot brass cross, as the even smaller synagogue prepared to hold Shabbat services in the same sanctuary.
The synagogue members moved an ark containing two Torahs, one of them rescued during the Holocaust, to the center of the chancel for their service. In the vestibule of the 151-year-old building, they replaced a large Presbyterian wall hanging with a Star of David quilt.
“As they say, they transform the church into a synagogue, and when they leave, they reverse the process,” said the Rev. Lynda Clements, the church pastor. “They do all the schlepping.”
It takes a lot more than pastry and schlepping to make space sharing work. In the many sharing relationships between congregations across the country, when there is trouble, it’s not always an interfaith issue.
Some of the thorniest problems have pitted Ashkenazi Jews against Sephardic Jews.
Faith communities face difficult issues in their struggle to survive and thrive. Sharing space with one or more congregations – same faith or interfaith – can enhance the survival process.
It can also complicate matters beyond the serious conditions that lead congregations to seek partners in the first place.
For many congregations, the issue comes down to numbers. Membership is dwindling as worshippers age; costs for maintaining buildings are rising and the next generation shows little interest in paying dues to join.
Space sharing can provide a lifeline for sinking congregations. It also can re-invigorate and provide new purpose and direction for congregants and the larger community.
“I think it’s wonderful,” said Bryna Milkow, who was rabbi at Etz Hayim Synagogue in Derry, New Hampshire, when space sharing began there. “I’m glad to be a part of it.”
Etz Hayim’s partner is the Church of the Transfiguration, an Episcopal congregation that shared its space with Etz Hayim for 17 years. Community members call their arrangement “the churchagogue.”
“We are two congregations sharing a ministry,” said the Rev. Ray Bonin at a celebration for a new sign honoring the houses of worship. “It’s been a great gift.”
An examination of a variety of religious space sharing arrangements reveals several descriptions, features and patterns in addition to “great gift.”
One consistent pattern is the absence of consistent patterns. Arrangements are made to meet individual situations, so “let’s not re-invent the wheel” becomes “Let’s replace the wheel if we need paddles.”
Here are a few examples of religious space sharing.

Derry, New Hampshire
The “churchagogue” in Derry started as a landlord/tenant relationship in 1992, with Shabbat services on Saturdays and church services on Sundays. Since Etz Hayim built its own synagogue in 2009, the two religious communities have maintained a strong spiritual and working relationship, including programs for youth to learn about each other’s faith and traditions, adult Bible classes, babysitting, piano lessons and free twice-monthly (one at each location) community meals, courtesy of the jointly operated “Elijah’s Table.”

Ann Arbor, Michigan
St. Clare of Assisi Episcopal Church and Temple Beth Emeth own and share a building called Genesis of Ann Arbor, through a joint corporation formed in 1976. Genesis also rents space to other organizations. Congregants from both faiths share a passionate commitment for community service; specifically, energy savings.

Waterloo, Ontario
Westminster United Church, which started in a school gym, now shares The Cedars Worship and Community Centre with Temple Shalom. The two congregations share a determination to practice what Temple Shalom would call a focus on tikkun olam (repairing the world).

Cutchogue, New York
Cutchogue Presbyterian Church, with a history dating back to the American Revolution, rents space to North Fork Reform Synagogue, a 50-member congregation that formed in 1992. Although both congregations raise funds for building improvements, neither identifies the other in its public information, aside from North Fork’s notice, in small letters, that “services and activities are held at the building we share with the Cutchogue Presbyterian Church.”

Sag Harbor, New York
First Presbyterian “Old Whalers” Church rents space to Synagogue of the Hamptons. Although neither’s website refers to the other, Pastor Susan McKeegan-Guinn says, “It’s a very close relationship. They are welcome as friends; we don’t think of them as people just renting space.” The sanctuary seats up to 900, more than enough for the Presbyterians; the chapel seats 100, enough for the 65-family Jewish congregation.
The Jews cherish the space as much as the Presbyterians. “That chapel is one of the most beautiful, prayerful places I have ever worshiped in,” said Rabbi Jan Uhrbach.
As in Cutchogue, the chapel cross is replaced by a portable ark for Jewish services.
“We are blessed with an opportunity for each of us to worship in the way that we do, respectful of each other’s traditions but maintaining our own identity,” Uhrbach said.
On High Holy Days, when the congregation is too large for the chapel, Uhrbach said it meets across the street in the social hall at St. Andrew Roman Catholic Church.

Brookville, New York
The New Synagogue of Long Island (150 members) and the Muslim Reformed Movement Organization meet in the Brookville Reformed Church. The synagogue started sharing space with the church by holding Shabbat services and life cycle events and now uses the full services of the church, rent-free. Muslims have a similar arrangement; unlike the synagogue, though, its worshippers don’t remove the cross for their services.
Neither tenant pays rent, although voluntary donations are accepted. The names of all three congregations appear on the sign in front of the church.
“They are not the stepchildren, not just somebody who comes in,” Pastor Allan B. Ramirez said. “They have access to all the facilities like anyone else, whether it’s the kitchen, the sanctuary or the parish hall.”
Ramirez said none of his parishioners had left because of the presence of the other two congregations. “If they did, I would have been glad,’’ he said. ‘’Obviously they don’t belong here.”
Rabbi Steven H. Moskowitz, of The New Synagogue, appreciates his hosts’ generosity.
“Reverend Ramirez has said his home is our home,” Moskowitz said, “and that is a wonderful example to all, and to my congregation in particular.”

The success or failure of any space-sharing arrangement doesn’t necessarily mean it will or won’t work in another context.
Paul D. Numrich, professor of world religions at Methodist Theological School, Ohio and Trinity Lutheran Seminary, said the real “glue” that keeps an institution alive over time are the social mechanisms – trust, legitimacy and transparency.
“Space sharing isn’t an either/or proposition,” he explained. “Adequate and clear design principles and social mechanisms of trust, legitimacy and transparency are crucial to creating and maintaining an effective space-sharing arrangement by religious groups, no matter the context.”