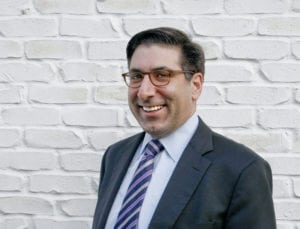 From his downtown office, Corey Shapiro follows very different court cases:
There’s the challenge to a state law requiring pregnant women to see sonograms of their fetuses and listen to their heartbeats before getting an abortion.
And there’s the man suing the state to put “I am God” on his vanity license plate. (The state won’t let him.)
To Shapiro, an attorney and the new legal director for the American Civil Liberties Union-Kentucky (ACLU-KY), these cases have one thing in common: They challenge state efforts to deprive people of their civil liberties.
Shapiro joined ACLU-KY in May. Broadly, his job is to manage the legal program. Specifically, he litigates cases that are docketed, makes decisions, with input from the executive director and the board, about what cases to take, and provides public education on legal issues.
He and his staff don’t just take cases in Louisville.
“We have all of Kentucky,” Shapiro said.
A litigator for 15 years, Shapiro brings to the job extensive experience in working for the rights of others. He worked for the civil rights organization People for the American Way following graduation from Washington University. Since law school, he has litigated several civil liberties cases pro bono (without fee) and received a “Lead On!” Award in 2012 for representing disabled adults in a class action civil rights case in Illinois.
“His credentials are impressive,” ACLU-KY Executive Director Michael Aldridge said in a prepared statement. “His experience as a litigator and community organizer is unique, and his vision for the Legal Program is energizing.”
Shapiro said the job just suits him.
“I’ve always maintained part of my practice as working pro bono civil rights-type cases,” he said, “so when this opportunity arose, I knew it was something I wanted to do full-time.”
He said the work he does dovetails with his Jewish teachings.
“Absolutely,” Shapiro said. “I think my commitment to social justice and civil rights comes from an upbringing of those same traditions of Judaism. I think they’re one and the same in a lot of ways.”
Some of the highest profile cases Shapiro and his staff are working on address abortion rights.
Case in point, ACLU-KY’s challenge of H.B. 2, the bill that requires women to view an ultrasound and hear the fetus’ heartbeat. The bill provides no exception to women who became pregnant as the result of rape or incest or who face a medical condition such as a birth defect.
“They are unable to decline,” Shapiro said. “Right now, it’s not being enforced. We have a preliminary injunction.”
Originally, the case was heard and won in U.S. District Court for Western District in Louisville. It has since been appealed to the Sixth Circuit Court of Appeals in Cincinnati.
He’s also challenging the state’s threat to revoke the license of Kentucky’s only abortion clinic, EMW Women’s Surgical Center, due to “technical deficiencies” in its agreements with a hospital and ambulance service. The state had approved these agreements in 2016 when it renewed EMW’s license, according to the ACLU.
“The tactics we see in Kentucky have been the same for over 30 years,” Shapiro said. “Anti-abortionists are chipping away at women’s reproductive rights through small restrictions that over time, they hope, will make it impossible for women in Kentucky to get the health care they need.”
But a big part of Shapiro’s job is to be a public face of the ACLU, which he did recently at The J, joining a panel discussion on civil rights following the final CenterStage performance of Hairspray. He also sat on a panel following a screening of RBG, a film about the life of U.S. Supreme Court Justice Ruth Bader Ginsburg.
But networking with the public goes beyond speaking engagements.
“We make reports,” Shapiro said. “We work with our organizers to give them information to take to our members and the general public.”
He also calls upon the national ACLU for resources when litigating his more high-profile cases.
Shapiro said he doesn’t fear attacks on civil liberties, but they must be taken seriously.
“Instead of being paralyzed by fear, we should take action and push back fiercely against these attacks,” he said.”Those who seek to limit our liberties are the real cowards, as they fear a society where the Constitution lives up to its promise to protect the most vulnerable, treat people equally under the law, and provide justice for all.”